I want to share a really cool new product that I have been lucky to try out recently. It is called INVICTA Challenge, and it teaches about history, leadership and heroes in an incredibly engaging way! INVICTA wants to teach kids about the great heroes and motivate them to be a hero in their own way. They are taking inspiring stories from history and turning them into games that kids will beg to play. (I was compensated for my time in writing this post and received free products, but all opinions are my own.) 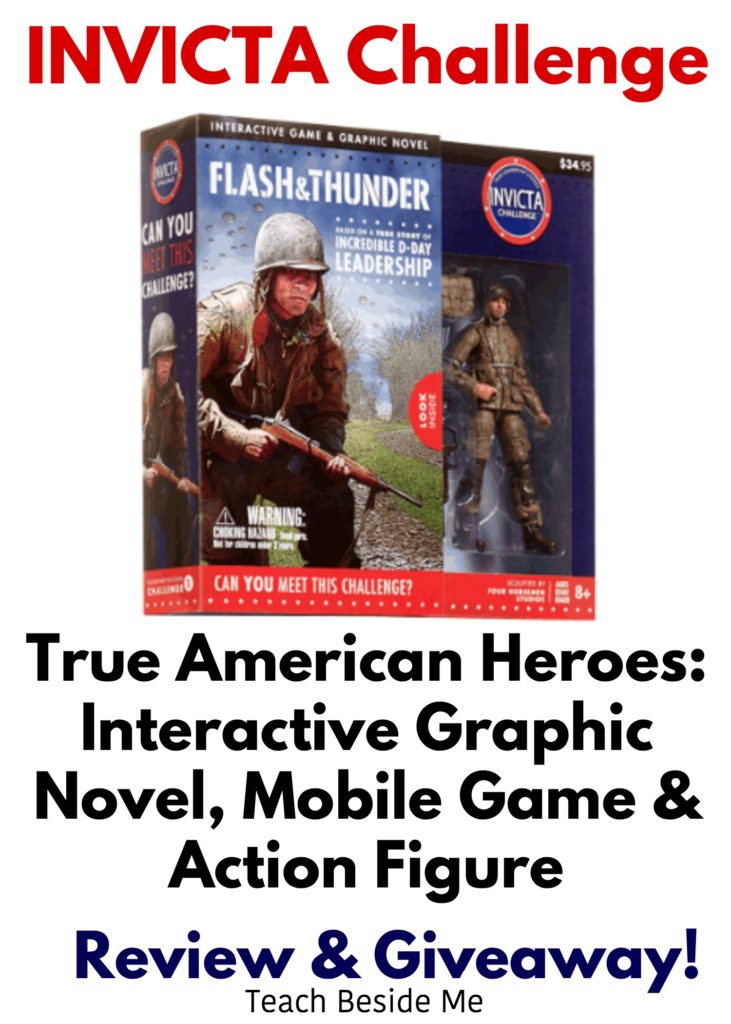 The INVICTA Challenge combines a graphic novel, video game, and collectible package to teach about these great heroes. The video game is actually a strategy game that they complete by reading the graphic novel and using the Top Secret mission clues provided in the challenge kit. The aim is to have a mobile app, but they have had trouble getting it up and running, so for now they have made it available to play online for free! (But it should be available within a week or two!)

I have an 11-year-old son who went nuts over the INVICTA Challenge. He thought it was just the coolest thing I have gotten to review in a long time. The first challenge they have developed is called Flash & Thunder and is the true story of a Native American Paratrooper’s leadership on D-Day.  On June 6, 1944, Turner Brashears Turnbull led his platoon of paratroopers in a defense of Neuville-au-Plain, a small village on the north flank of the Allied invasion zone.  He and his men held off at least ten times their number of Germans during a critical period of the D-Day landings, preventing them from reinforcing the Nazi defenders of Utah Beach. Their actions saved countless American lives. 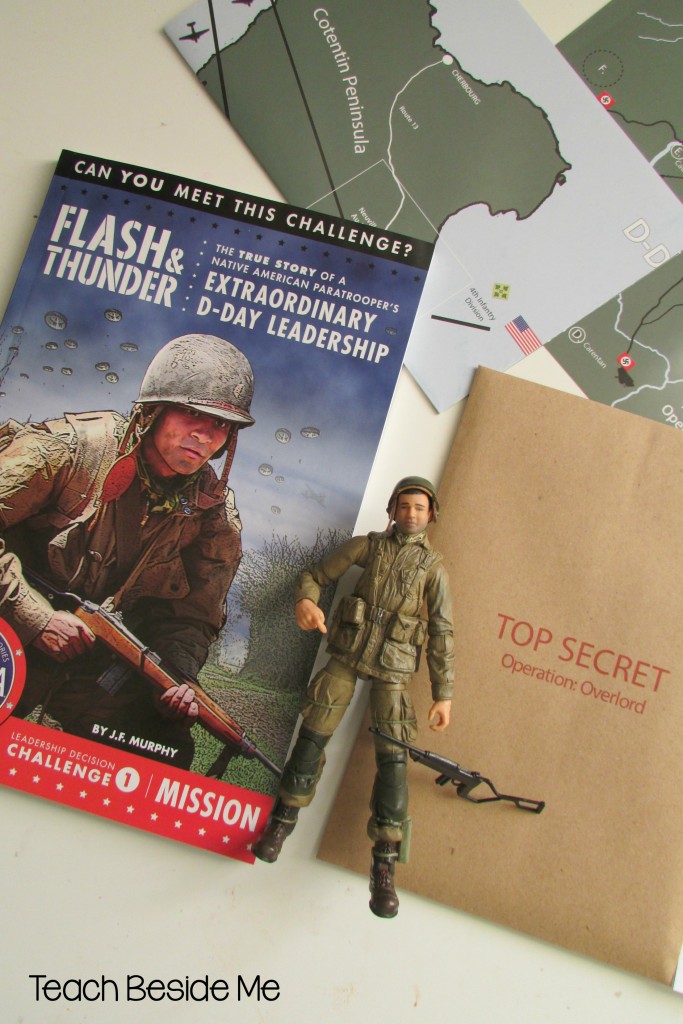 The INVICTA Challenge set came with the novel, an action figure, a set of mission clues, and a map of the operation. To play the challenge, you begin by reading the graphic novel which tells the story of the D-Day mission. It is interesting and engaging and what boy wouldn’t love an exciting graphic novel about war? Once he read the novel, he was ready to play the game.  Then we used the tools to play the game that goes along with it.  If you do not know the story or use the clues, the game is quite difficult.  My son kept failing the mission the first few times until he put it together that he needed to use the book and clues as a reference the entire time. These showed him where to go and when during the different battles. 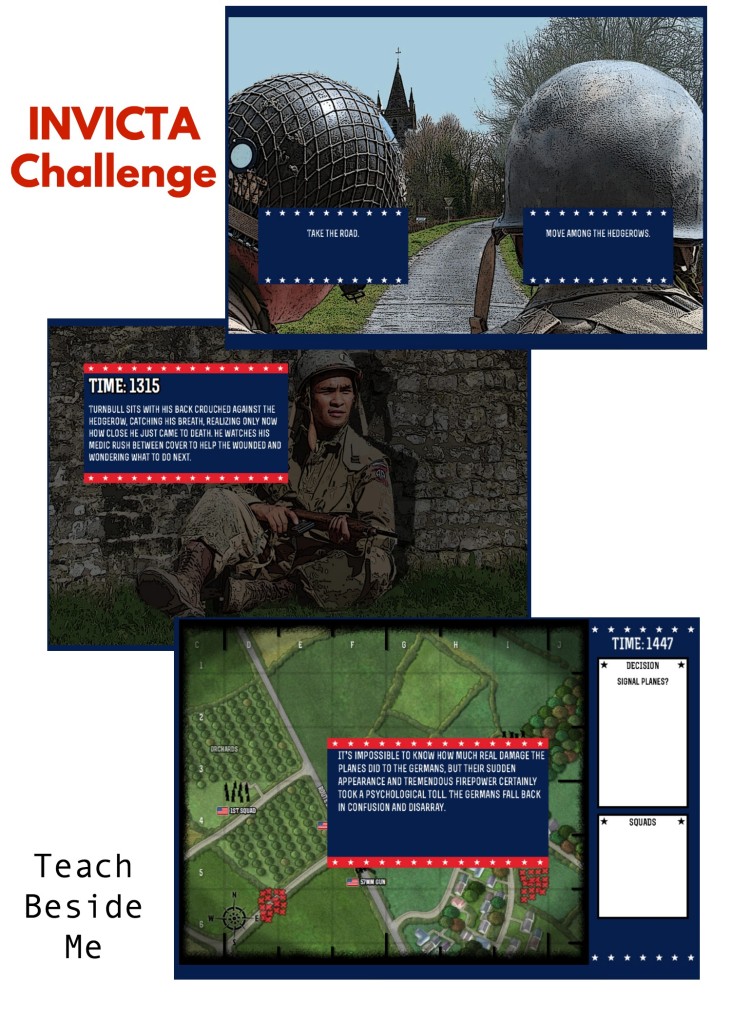 I really love the vision of this company. They will have more of these challenges coming out honoring the work and lives of different heroes. I am excited to see what they will be. It is definitely something worth purchasing. I love that they are making history so fascinating for kids (and adults). I also love that they are donating a portion of their proceeds to create a Turner Turnbull Scholarship with the Chahta Foundation (In honor of the first hero portrayed), a nonprofit that works alongside the Choctaw Nation of Oklahoma. The company will donate a portion of its in-app sales to this scholarship supporting a Choctaw Nation student in his or her 2nd year of college. The company will kick off the scholarship drive with a donation of $1,000 at a Dec. 3 event in Durant, OK with the Choctaw Nation.

The founder of the INVICTA Challenge is Jim Murphy, a former Marine Corps infantry officer with extensive experience in the toy and video game industries. After serving in Iraq, Murphy earned an MBA from the University of Southern California. His civilian career path led him to leadership roles at Mattel, Activision-Blizzard and Spin Master. He started INVICTA Challenge with his wife, Laura, a former schoolteacher and non-profit executive. Together, their passion combines reading, leadership and history, and as a result, INVICTA Challenge is an entertainment brand with a mission – to tell stories that motivate kids to reach their greatest potential and gain respect for American leaders. For more information, visit invictachallenge.com.

They sell the INVICTA Challenge at Barnes & Noble and Amazon for $34.99. It is recommended for ages 8+.  It was just featured on Fox News!