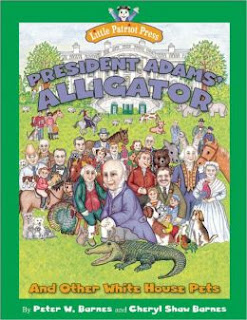 Did you know President John Quincy Adams had a pet alligator? He kept it in a bathtub in the East Room of the White House. But President Adams wasn’t the only commander-in-chief with an unusual pet. Along with a collection of dogs, cats, horses and birds, presidents and their families also had pet snakes, raccoons, bears, cows, mice, and more. Meet Thomas Jefferson’s mockingbird, who ate from the president’s mouth; Warren Harding’s dog, who was served a birthday cake made of dog biscuits; and Teddy Roosevelt’s pony, who rode up the White House elevator. President Adams’ Alligator teaches children about the presidency through pets of the presidents, from George Washington to Barack Obama.

Peter and Cheryl Barnes from Little Patriot Press have done it again.  They have created yet another story to teach our young ones about history in such an entertaining way.  This time the story is all about the pets that have lived in the White House.  President Adams’ Alligator and Other White House Pets is a fun story telling about the pets of the different presidents through the years.  It was fun to learn about all the interesting animals that have lived there- I really had no idea!  My kids and I really enjoyed this darling story.

The book begins in a classroom setting.  The teacher is telling the kids about all of the strange pets that are in the White House- including the alligator.  The book goes through each of the presidents and tells of their pets and any interesting facts about them.  At the end, each student from the class voted on their favorite White House Pet.

This book, along with the books in this series has some fun things to enhance the reading experience!  Each page has a little alligator hidden somewhere.  As you read to your children, they can search for it.  Some are quite tricky, but we managed to find them all.

The other thing that I love about these books are the resources at the end for parents and teachers.  This book includes some additional facts about pets, and the pets of the presidents.  It also has a fun Presidential Pets Matching game!  There is even a picture of the authors with their pets.

I really love books that teach, but do it in a fun way.  That is really the way learning should be. I have been so impressed by the books that Peter and Cheryl Barnes have created. I appreciate that they share their love for history with children in this way.  I look forward to more of their titles in the future!

See my reviews of some of their other books:
Woodrow for President
Woodrow the White House Mouse
Liberty Lee’s Tail of Independence

Peter and Cheryl Barnes are a husband and wife writing / illustrating team specializing in educational books for children. They are creators of more than a dozen books, many of which have been featured on numerous top-tier TV and radio shows including The Today Show, C-Span’s Book TV, National Public Radio, and in prominent print outlets such as the New York Times, Washington Post, Wall Street Journal, Roll Call, Washington Times, and Child Magazine.

Cheryl and Peter’s books have won numerous national and regional book awards including the 2010 USA Book New Best Book Award, the National Council for the Social Studies Notable Trade Book for Young People Award, and the Distinguished Authors for a Body of Work Award from the Capital Books Festival. As the owners of VSP Books, the Barnes’s also published the New York Times bestsellers Heartsongs and Journey through Heartsongs by Mattie Stepanek, a young poet with muscular dystrophy whose friendship with Oprah Winfrey catapulted him to international prominence.

Cheryl is an illustrator with a background in architecture and is Creative Director of Little Patriot Press. Peter is a journalist who currently works for Fox Business Network. He has also reported for CNBC, The Wall Street Journal and other news organizations. They have two grown children and one grandchild and live in Alexandria, Virginia.