My 11-year-old son is a reader. He would read all day if there were not other things to get done. He has always been that way and because of that, it has been a challenge to find books to keep up with his love of reading. Today I have a list of 21 series books for tween boys. We chose series books because he loves to find books that will keep going in the story for a while. (Check out the list I made for my tween girl, too!) This list is not exclusive to boys. My daughter has also read and loved many of these books. But, sometimes boys and girls have different tastes in books and these are ones that my son definitely did enjoy.

These are all picked by my very own tween boy! Many of these he has read multiple times because he loves them that much. So, if you are struggling to get your son to read, or you have a reader like me, you will want to look into these books. Hopefully you will find something your son (or daughter) will love, too! 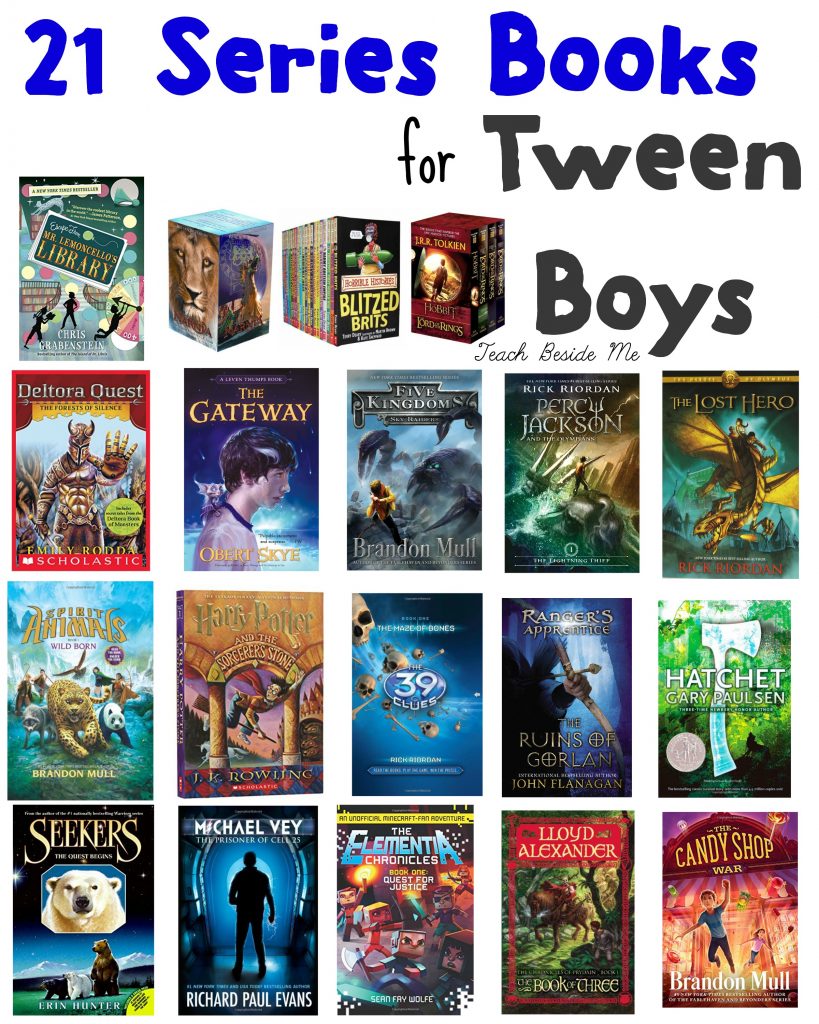 Also, check out my Called to Homeschool Podcast Episode on Books for Tweens:

How to Train Your Dragon series by Cressida Cowell- This series is about a viking boy who is the weakest member of his tribe. Despite this, he goes on to save his whole world. This is also the series that the How to Train your Dragon movies were inspired by.

The Percy Jackson series by Rick Riordan- In this series a boy finds out he is the son of a Greek God, which makes him a Demigod, and goes to a camp with all the other children of the Greek gods. Him and his friends go on quests together encountering all different kinds of classic Greek monsters, set in a modern time.

The Five Kingdoms series by Brandon Mull- This series is about a boy who falls into a different world through a grate in a neighbors basement. He meets one of the princesses of this world, who should be dead, and they set out to free the land from a tyrant king.

The Candy Shop War by Brandon Mull (He loves ALL Brandon Mull books!!)- In the trilogy, a group of kids find out that the lady who owns the new candy shop in their town makes magic candy that helps them to do incredible things.

The Spirit Animals series (various authors)- This series is set in a world much like our own, except everyone gets the chance to summon their own Spirit Animal that guide and helps them. All at once, four kids around the world summon Spirit Animals that once were the most powerful animals alive.

The Seekers series by Erin Hunter

Elementia Chronicles by Sean Fay Wolfe- This is a fan written Minecraft series, that almost seems like real life. Three friends have to save their world from an evil king who makes it so everyone can only die once. This one is for younger kids, and fans of Minecraft .

Harry Potter series by J.K. Rowling- In this series, a boy is visited by a giant man who tells him he is a wizard. Then he goes to the school for wizards where he finds out he is the only survivor of the most evil wizard to live, and he wants him dead.

The Chronicles of Narnia by C.S. Lewis- Four kids who have to evacuate to the country because of World War 2 find a secret hidden world in their caretakers wardrobe. They have to save this world from an evil queen and an eternal winter.

The Wingfeather Saga by Andrew Peterson- Wingfeather saga is about a three siblings who live in a world ruled by the evil Gnag the Nameless and his lizard minions. They find out that they are royalty and have to overthrow Gnag and defeat his armies. This series is very odd, but a very satisfying read.

Mr. Lemoncello’s Library series by Chris Grabenstein- In this book a kid misses his extra credit assignment to write an essay for the opening of a new library, built by an eccentric owner of a toy company. He wins anyway, and gets to go on a crazy adventure inside the state of the art library, competing with the other winners for a huge prize.

Horrible Histories/Math/Geography/Science (various authors)- These books have been some of my son’s favorites. They tell the often gross truth about all different kinds of subjects. The history and science ones can get a little bit bloody at times, so they are for older kids.

The 39 Clues series (various authors)- In this series two siblings and their whole family are all a part of a big game. The prize? Ruling the world. The kids have to keep their relatives and others from winning and destroying the world. They travel all over the world following different clues and avoiding death at every turn.

Hatchet series by Gary Paulsen- In this series a boy crashes an airplane in the middle of the forest and has to survive using only an old army survival guide he found in the plane and his hatchet.

The Ranger’s Apprentice series by John A. Flanagan- In this series an orphan boy who was raised in a castle in taken as the apprentice of a legendary Ranger. Master archers who never miss, and can disappear into the shadows at will. This was one of my sons all time favorite series .

The Hobbit and The Lord of the Rings (if they are a more advanced reader) by J. R. R. Tolkien- These classic stories follow the adventures of two different dwarf like Hobbits. Bilbo Baggins and his Great nephew Frodo. Bilbo finds a ring that give him extraordinary power, and Frodo has to destroy it before the Evil Lord Sauron can use it to rule all of Middle Earth.

The Brotherband Chronicles by John A. Flanagan- This is the sequel to The Ranger’s Apprentice.  It is set in a different part of the world with vikings who sail around the world rescuing treasure.

The Keepers of the Lost Cities series- by Shannon Messenger- This is about a girl who finds out she is an elf. She is taken to a magical world where people live forever and have special powers.

That’s the end of my list, but I would love to know if you have others to recommend?  My son is always looking for his next exciting books to read!  Do you have younger kids looking for books, too?  Check out this MEGA list of Books for Young Readers.

Also, I have a book list for Tween Girls, too!

This is part of the Massive Guide to Homeschool Reading Lists Link-Up. 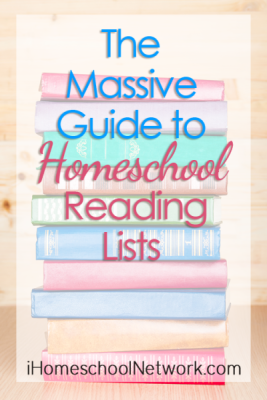