How to Make Rock Candy Crystals with Kool-Aid

I have a super fun kitchen science activity for you today~ How to Make Rock Candy with Kool-Aid. This is the perfect at home Summer project to do with kids right now. (See more Kitchen Science ideas!) 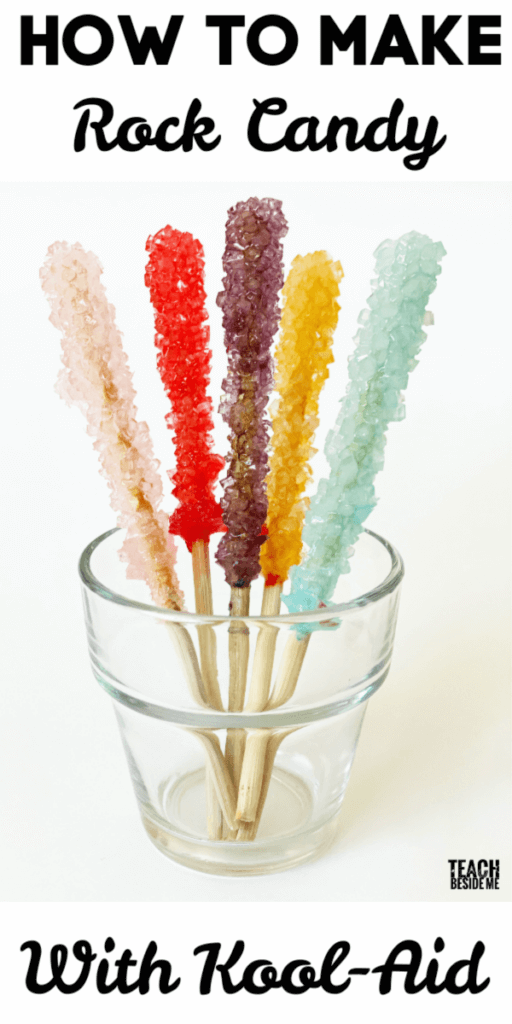 I took a lot of pictures of this project. They were just so pretty and colorful!

How to Make Rock Candy Crystals with Kool-Aid

Rock candy crystals are easy to make, but take some time. You’ll need to plan ahead for this one! We let ours grow for 2 weeks.

To make them, you need just a few supplies.

Preparing Your Sticks for the Rock Candy

We used wooden skewers. I cut the sharp tips off the top so nobody would get hurt when eating them! 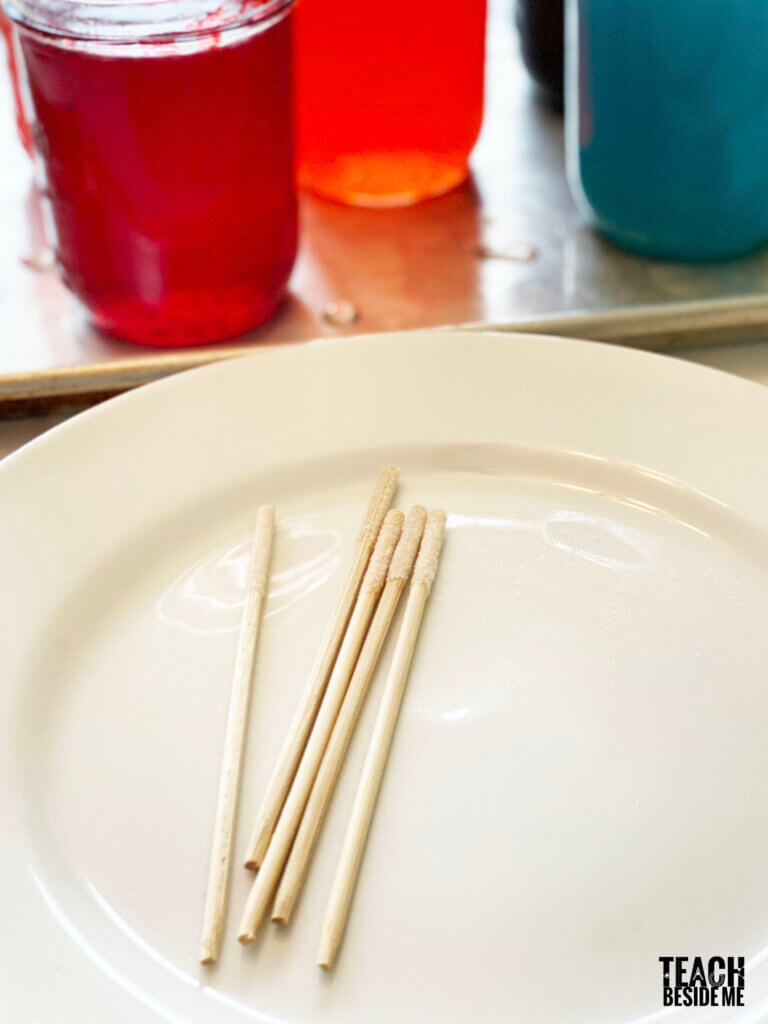 Soak the sticks in water for 30 minutes to an hour. I places them into a cup of water and stick a bowl over the top to keep them down since they float!

Once they are fully wet, pull them out and roll the ends in sugar. Let them dry completely on a plate. This gives the sugar crystals a base to begin growing on the sticks.

To make 5 different flavors I used 8 cups of water and I believe 17 cups of sugar. (I kind of lost count towards the end!) The trick is to keep adding until the sugar does not dissolve anymore.

Cook until all of the sugar is completely dissolved and it comes just to a boil.

Remove from the heat and allow it to cool for 10-15 minutes (depending on the quantity you make it may take a little longer to cool.) 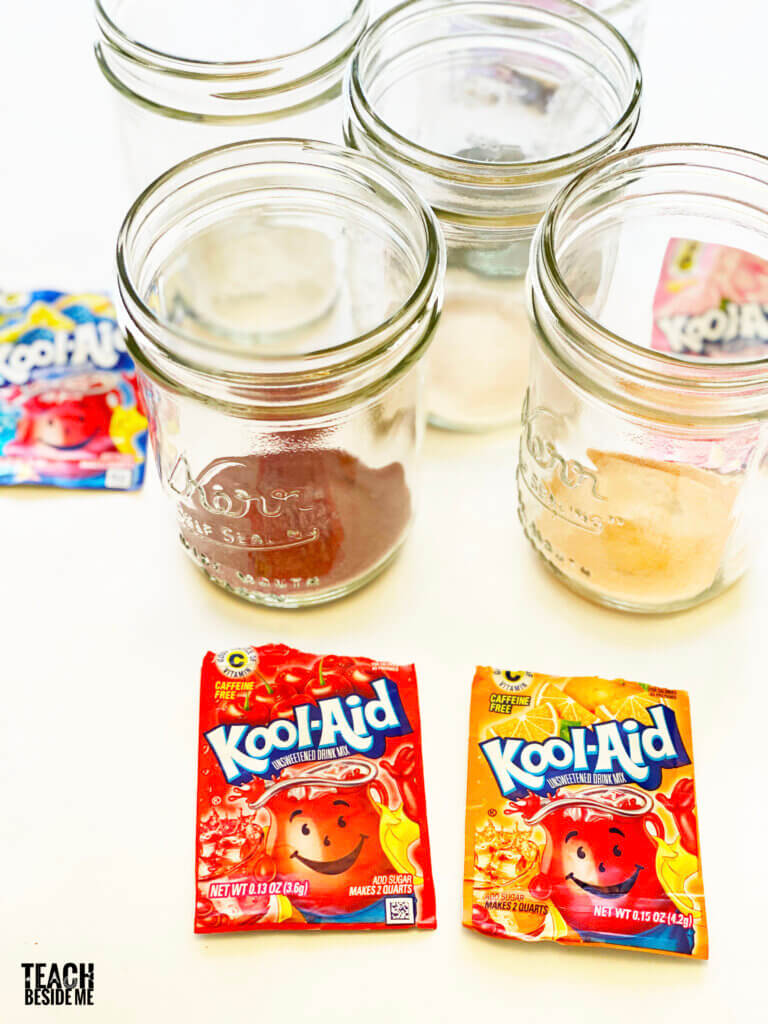 Prepare your jars. Make sure they are clean and ready. Pour a packet of Kool-Aid into your jar.

With the flavor intensity, you definitely could split these Kool-Aid packets into two jars. We didn’t but there was a ton of flavor!

You can do this without Kool-aid, too! Just add in flavor extracts and add food coloring. The easy thing with using Kool-Aid is that it already has the color and flavoring.

Carefully pour the sugar solution into the jars and stir it well. It is tricky to get all of the Kool-Aid to dissolve. You can see from my pictures that mine was not fully dissolved, but it’s ok.

Attach the sticks to clothespins with the sugar side down. You don’t want the stick to touch the side or the bottom of the glass jar. If it does, the crystals will grow and attach them making it harder to remove. 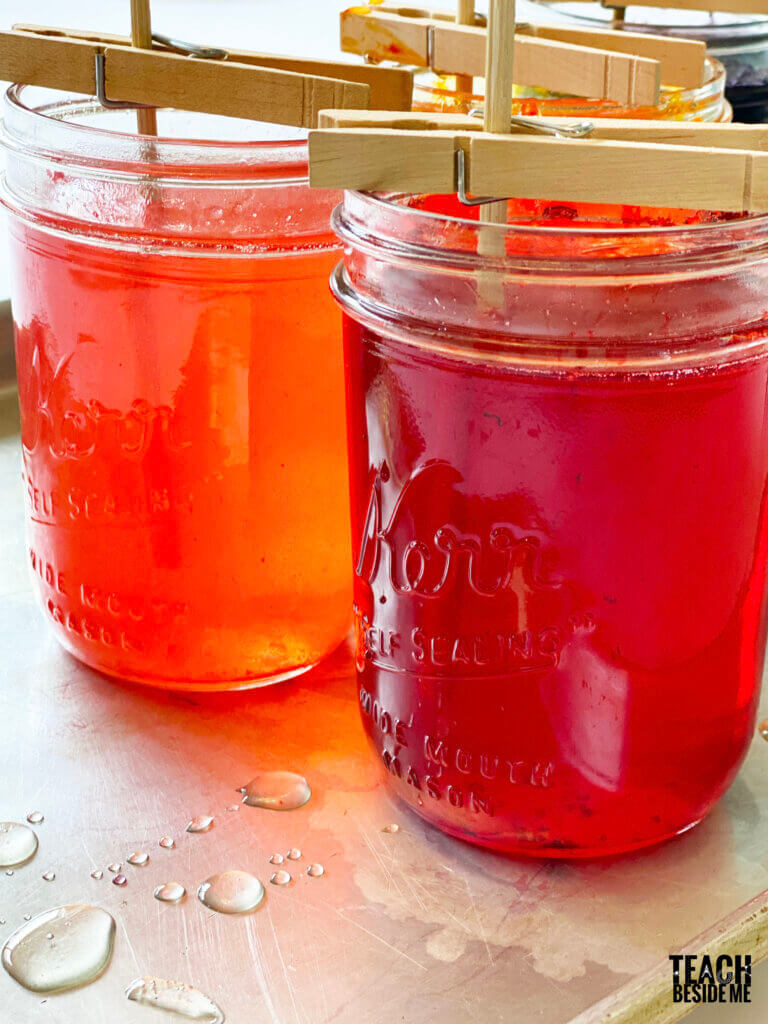 When you put the sticks into the jar you’ll have to balance the clothespins of centered a little bit so they stay on top. 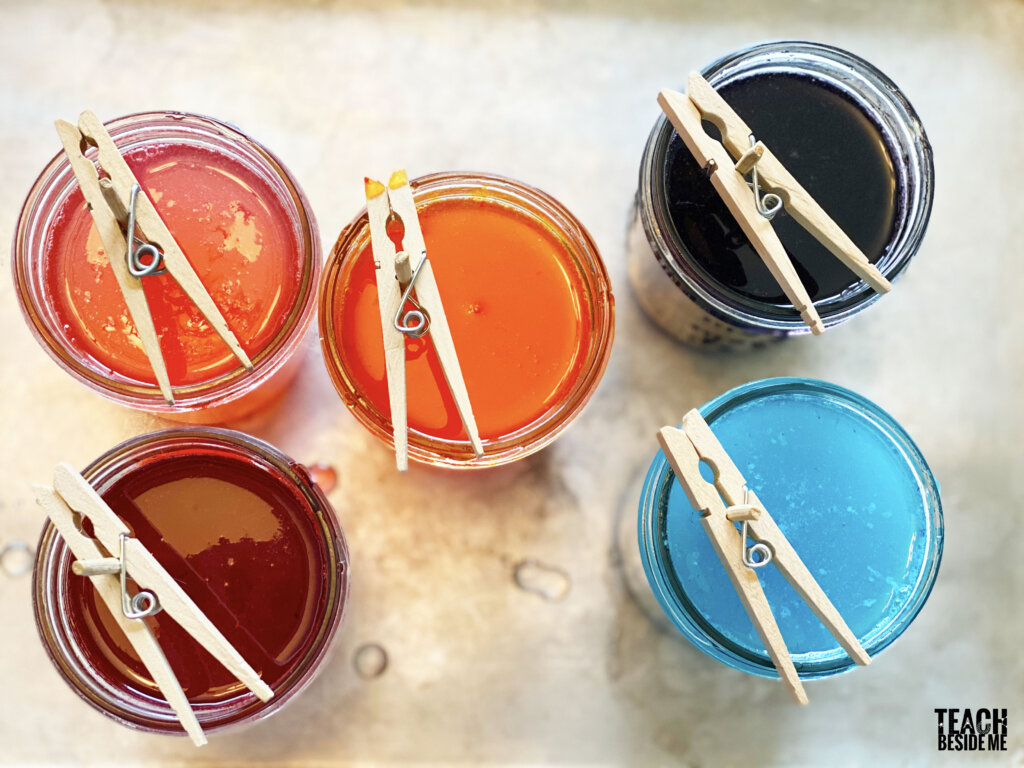 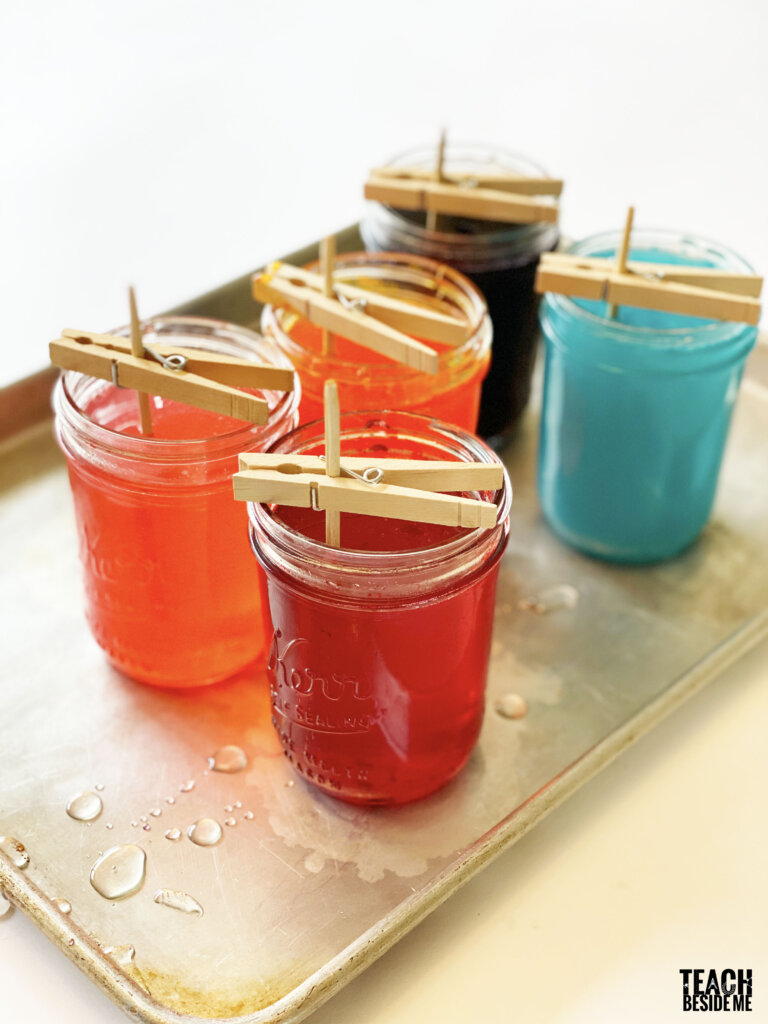 I covered out jars with foil for the two weeks to keep them clean.

We peeked at them a lot over the days. Crystals form on the top of the jar and I broke them up every couple of days. You want to disturb them as little as possible, though. 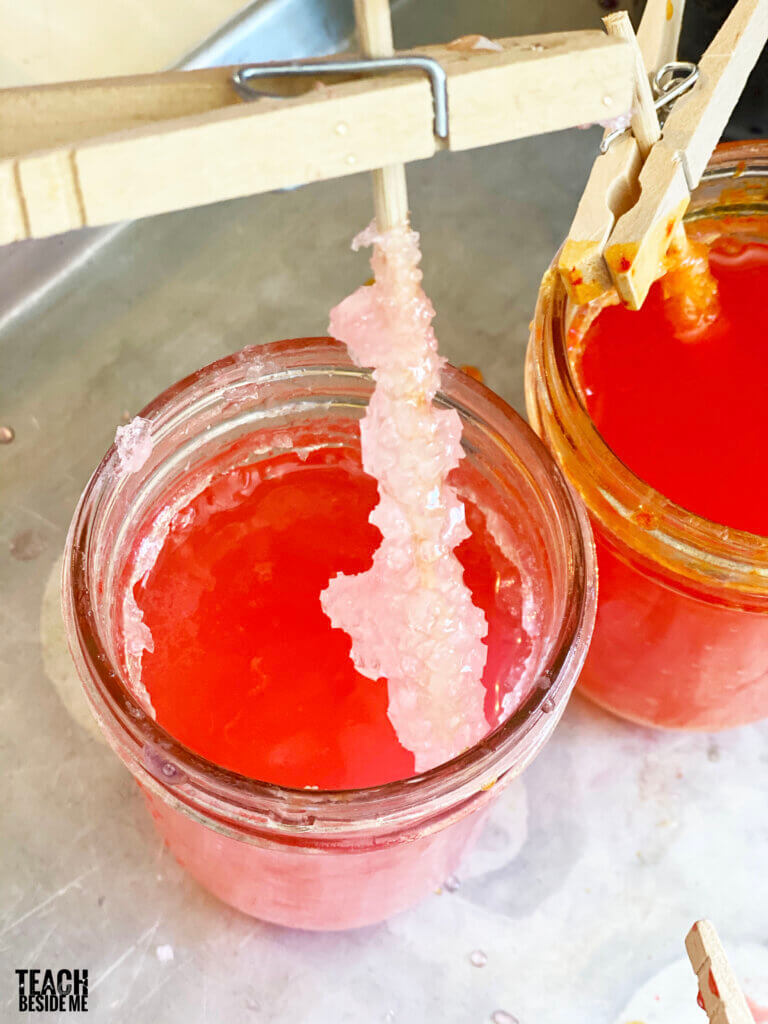 When you finally decide to pull them out to eat, they will be drippy and messy. Just lay them on the side of the pan to drip dry. 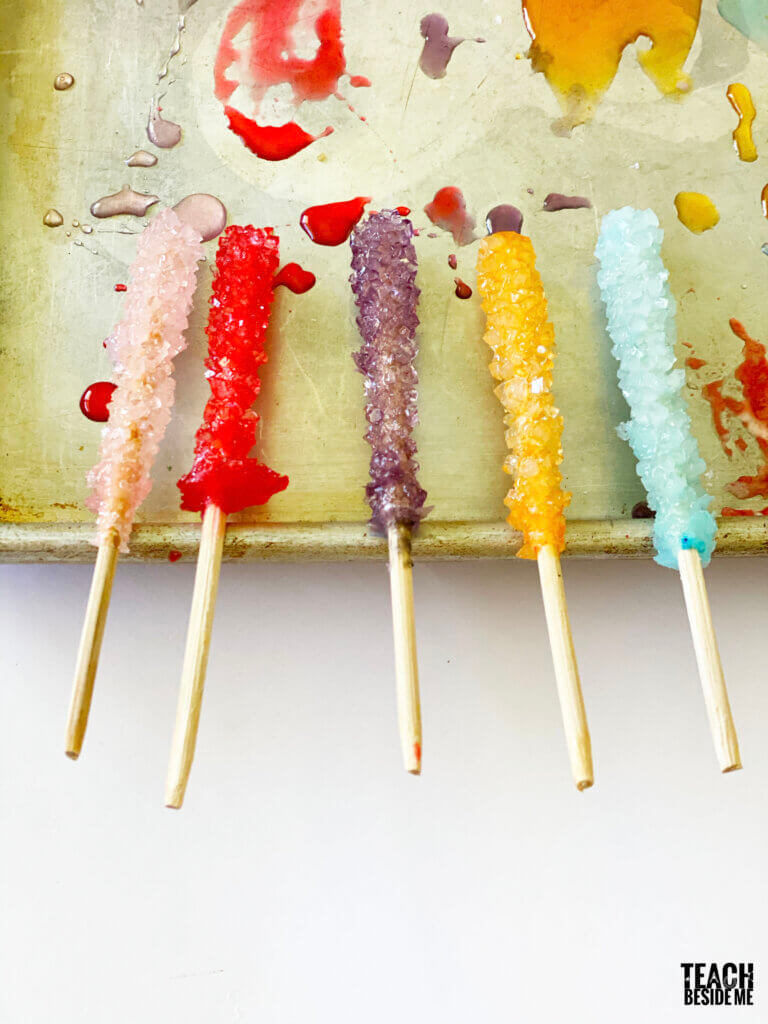 Now you get to eat them! This is the best part. My kids all wanted to try all of the flavors.

Luckily there was a lot of crystal growth left in the bottom of the jars. They could all try the different flavors!

The Science Behind The Rock Candy Crystals:

When you make the sugar syrup for the rock candy, you are making a supersaturated solution. This means there is more sugar in it than can actually stay in there. It is unstable.

As the temperature decreases, the sugar comes out of the solution. This sugar forms into crystals.

We prepared the sticks for crystal growth by putting some sugar on it allowing the sugar to start attaching to it. These are called seed crystals.

The other thing going on with this is evaporation. During the 2-week period of crystal growth, water evaporates from the jars, too. As the water leaves, there is still more sugar available to grow on to the crystals. 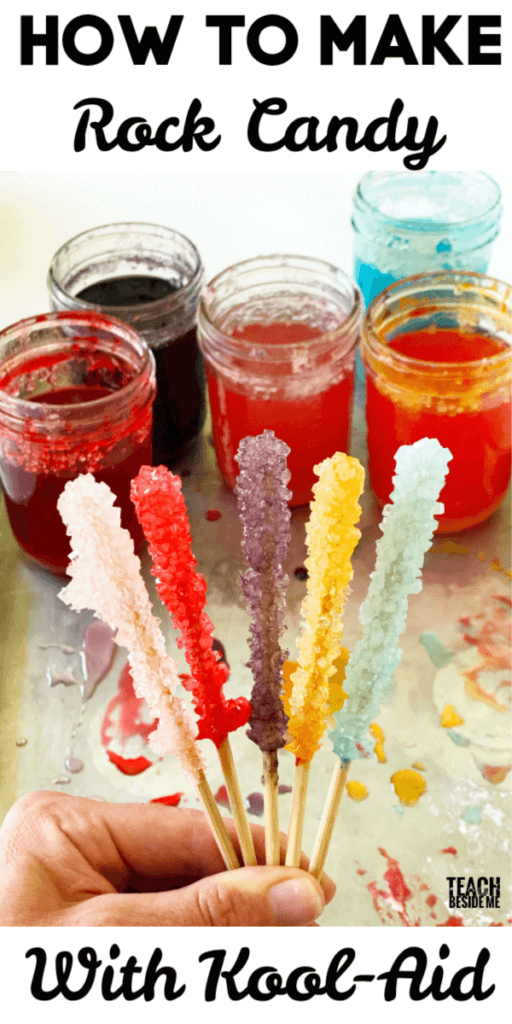 STEAM Kids in the Kitchen