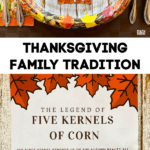 This year we are having a small Thanksgiving with just the people who live in our home. It will definitely be different than normal, but we are upping the Thanksgiving traditions to make it more special.  Today I want to share with you a fun and simple tradition that I love, the Legend of the Five Kernels of Corn. 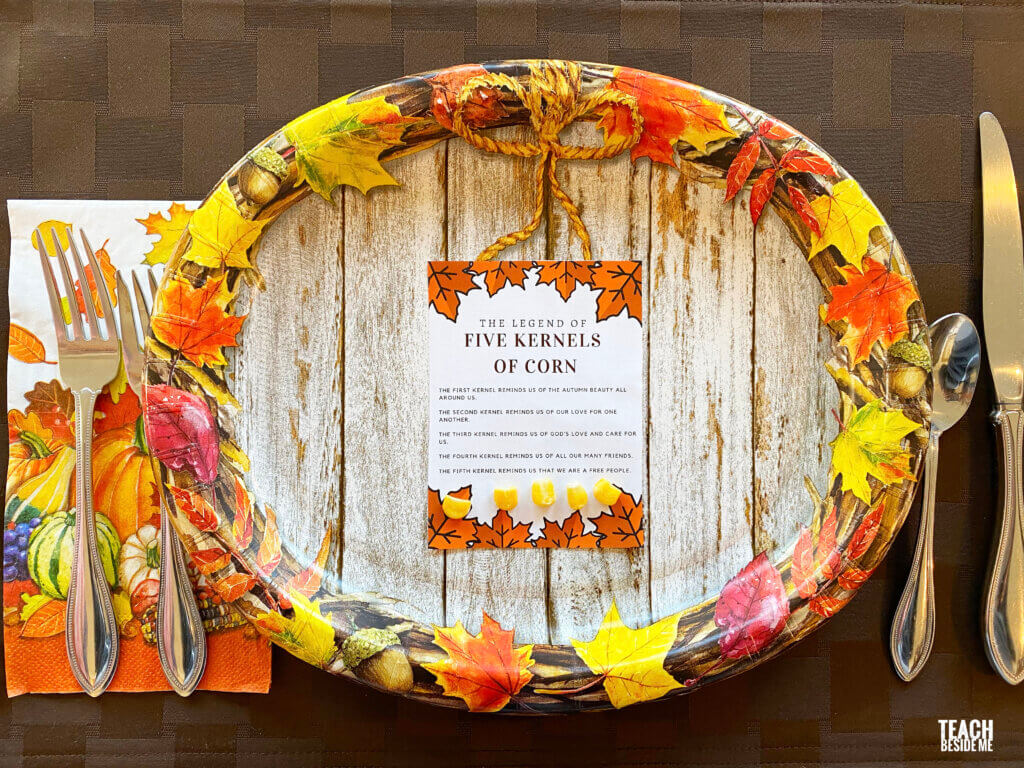 This Thanksgiving tradition is a wonderful gratitude activity to recognize how much you have and how blessed you are each year during the holidays. A friend of mine just introduced it to me and I am excited to implement it this year in our home.

Thanksgiving Tradition: The Legend of the Five Kernels of Corn

If you have ever read the Little House on the Prairie books by Laura Ingalls Wilder you may remember this story.  (Those are some of our favorite books!)

The legend goes that in 1623, two years after the first Thanksgiving, there was a drought which led to a famine for the pilgrims.  William Bradford was the leader of the colony.  He said their situation was similar to the Romans who were said to survive on a ration of five kernels of corn.

They were not entirely without food, but were slowly starving our to the lack of grain. Bradford said that they would have considered five kernels of corn (or maize) as good as a feast! From then on, the legend says that they celebrated Thanksgiving by beginning their fest with five kernels of corn on their plate.

What Each of the Five Kernels of Corn Represent: 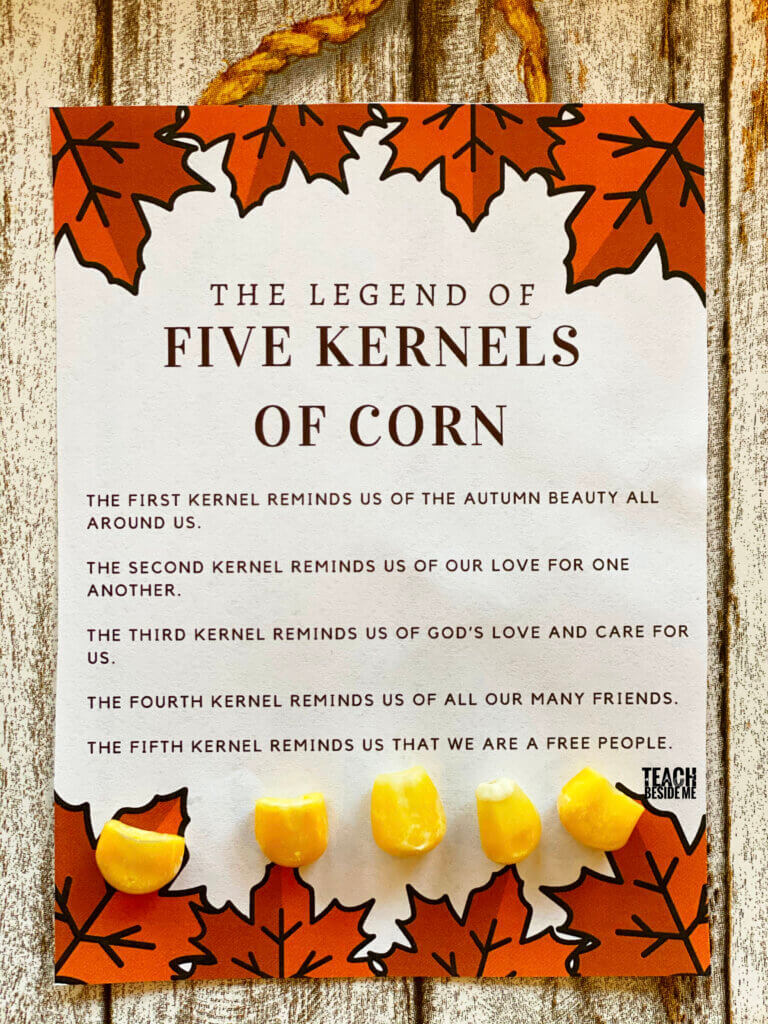 I have a printable you can use. Here is a modified version without the mention of God to use in schools, too.

Get it emailed right to you by subscribing now! 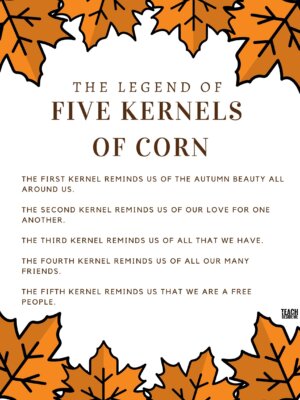 This turned into a tradition, practiced by many at the beginning of a Thanksgiving feast. It helps people remember the famine and be grateful for the bounty that you have.  It’s a beautiful tradition!  We are excited to start it this year in our family.

This year, though it has been a hard one for us and for many, we have so much still to be grateful for. Our family has been spending the week leading up to Thanksgiving focusing on gratitude and giving thanks for all that we have.  This fun little legend and tradition seems the perfect thing to add in.

I plan on printing the five things that the corn represents and placing it on each place setting along with five kernels on each person’s plate.  We will read it together at the beginning of our meal and eat the five kernels before our Thanksgiving meal.

There is a famous 19th century poem by Hezekiah Butterworth that is fun to read while teaching or telling of the legend of the Five Kernels of Corn.

Grab all of these in my Free Printable by subscribing now!! 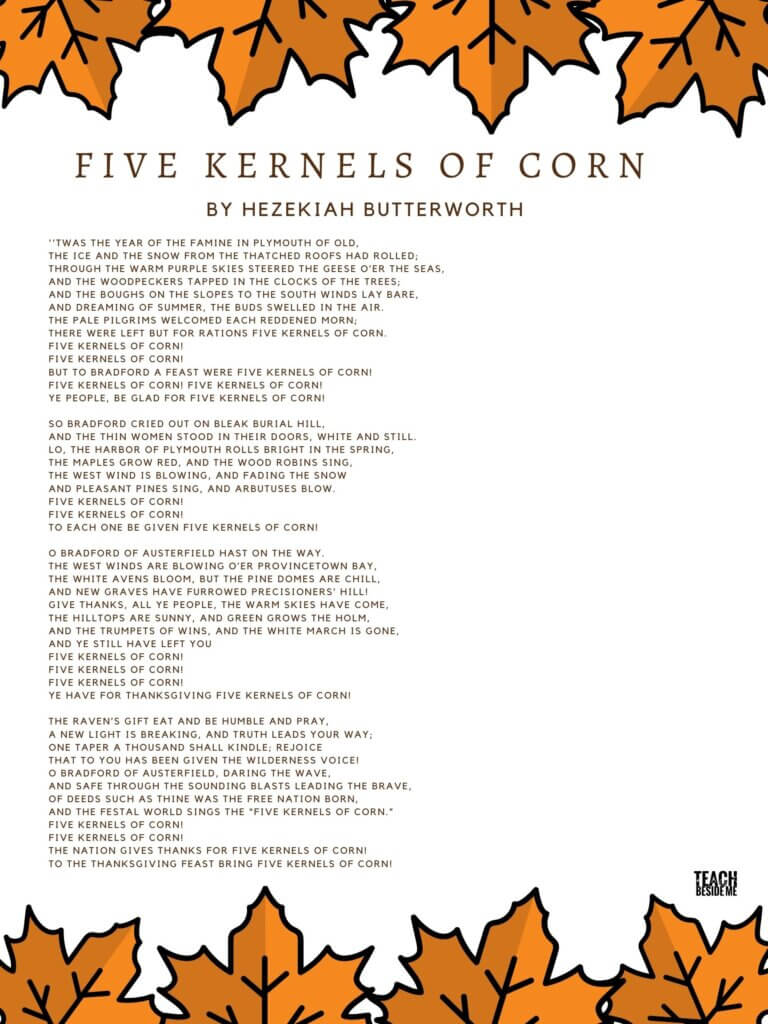 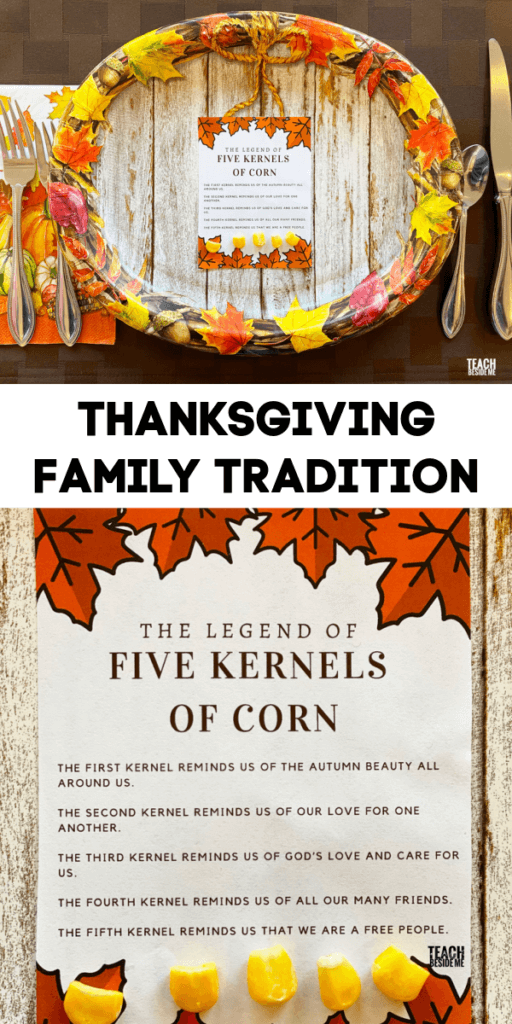 More Thanksgiving Traditions We Love as a Family:

Since the women usually cook, the men are on clean-up duty!

Keeping a Gratitude Journal leading up to Thanksgiving Day