Harry Houdini is considered the greatest and most famous magician ever. His birthday is in March, so I thought I would share some ways you can learn about him and a few simple magic tricks for kids, too. Houdini (originally named Ehrich Weisz from Hungary) was a pretty impressive man and accomplished so much in his life. He was Jewish and immigrated with his family to the United States to escape persecution. He loved magic tricks from the time he was young, but became most famous for being an escape artist. My kids were fascinated with him and they wanted to learn some magic tricks.  We hiked on over to our local library to check out some books about magic and about Houdini. There are so many great ones to choose from! 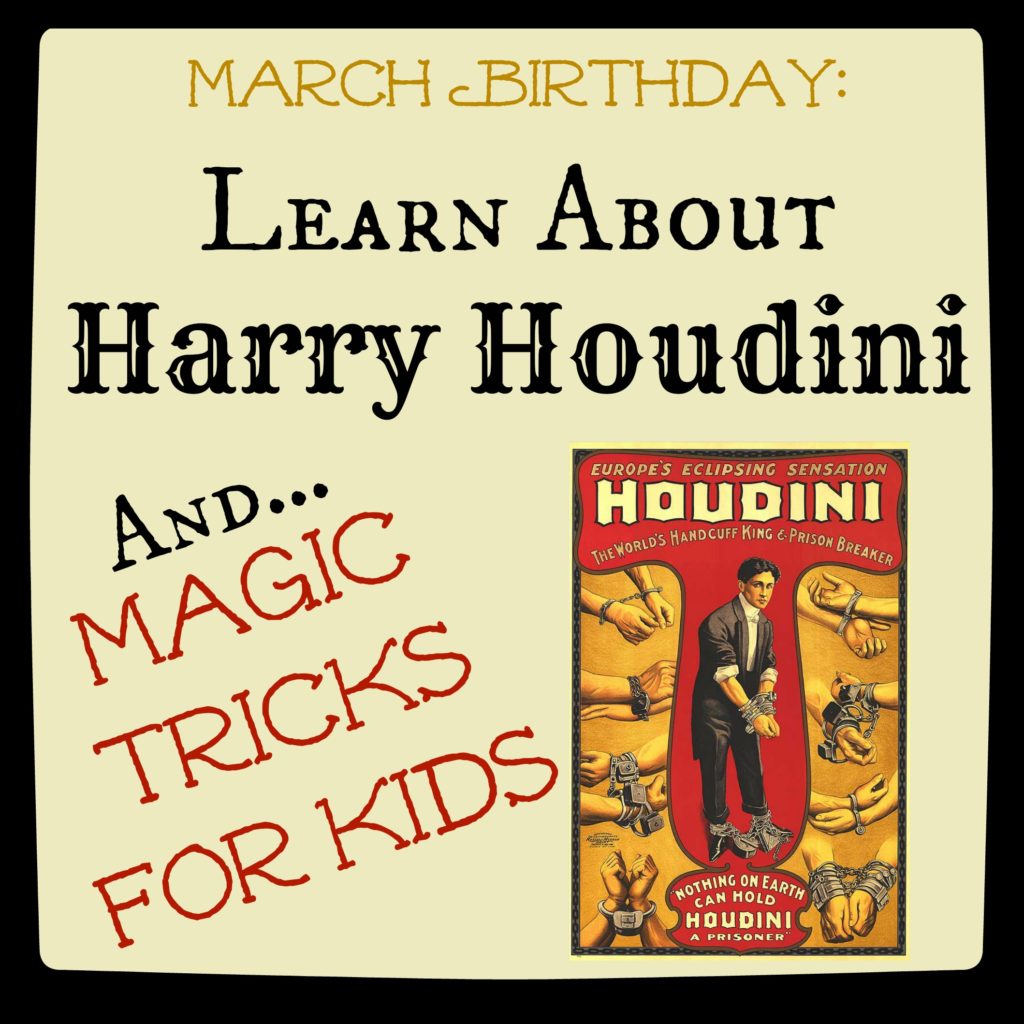 At the library, I found this neat jewel of a book: 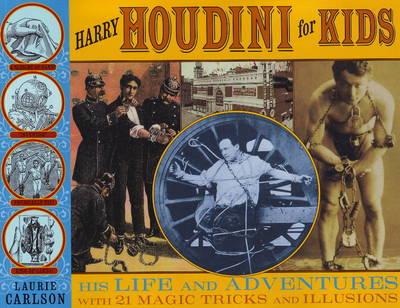 Harry Houdini for Kids: His Life and Adventures with 21 Magic Tricks and Illusions by Laurie Carlson. It is a great book that tells about his life and it is interspersed with fun magic tricks and illusions that kids can do with a few simple supplies. WE have been really enjoying this book. I am excited to see there are more books in this series.

In my quest for books on Houdini, I found so many other books that look fun and interesting. We will be reading about him for a little while in our house! 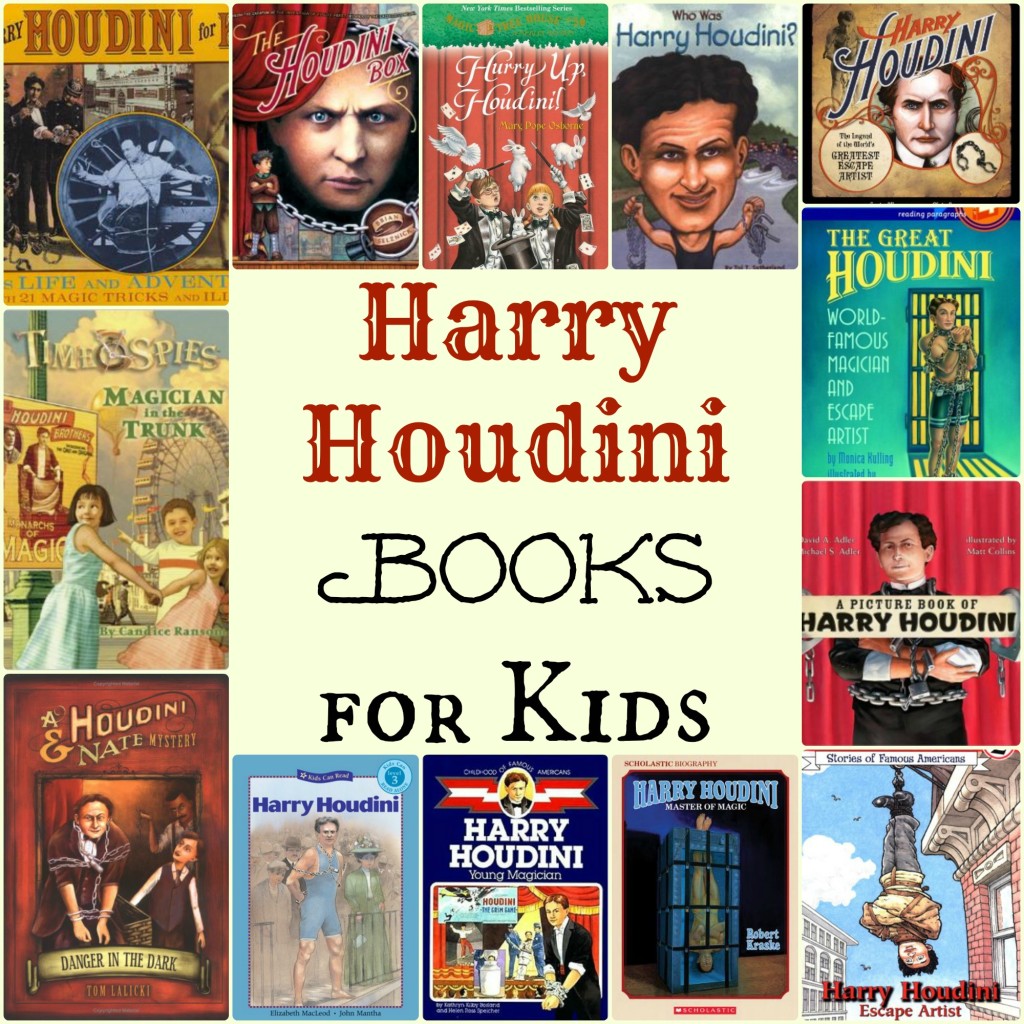 Who Was Harry Houdini? by Tui Sutherland
The Houdini Box by Brian Selznick
Harry Houdini, Young Magician (Childhood of Famous Americans) by Kathryn Kilby Borland
Magician in the Trunk: Time Spies by Candice Ransom
Magic Tree House: Hurry Up Houdini! by Mary Pope Osborne & A Companion Guide
Harry Houdini: Kids Can Read by Elizabeth MacLeod
Harry Houdini: Escape Artist by Patricia Lakin
A Picture Book of Harry Houdini by David A. Adler
Danger in the Dark: A Houdini and Nate Mystery by Tom Lalicki
The Great Houdini by Monica Kulling
Houdini: Master of Magic by Robert Kraske
Harry Houdini: The Legend of the World’s Greatest Escape Artist by Janice Weaver

Now for a super simple magic trick that you and your kids can do. . .

Stepping through a piece of paper: 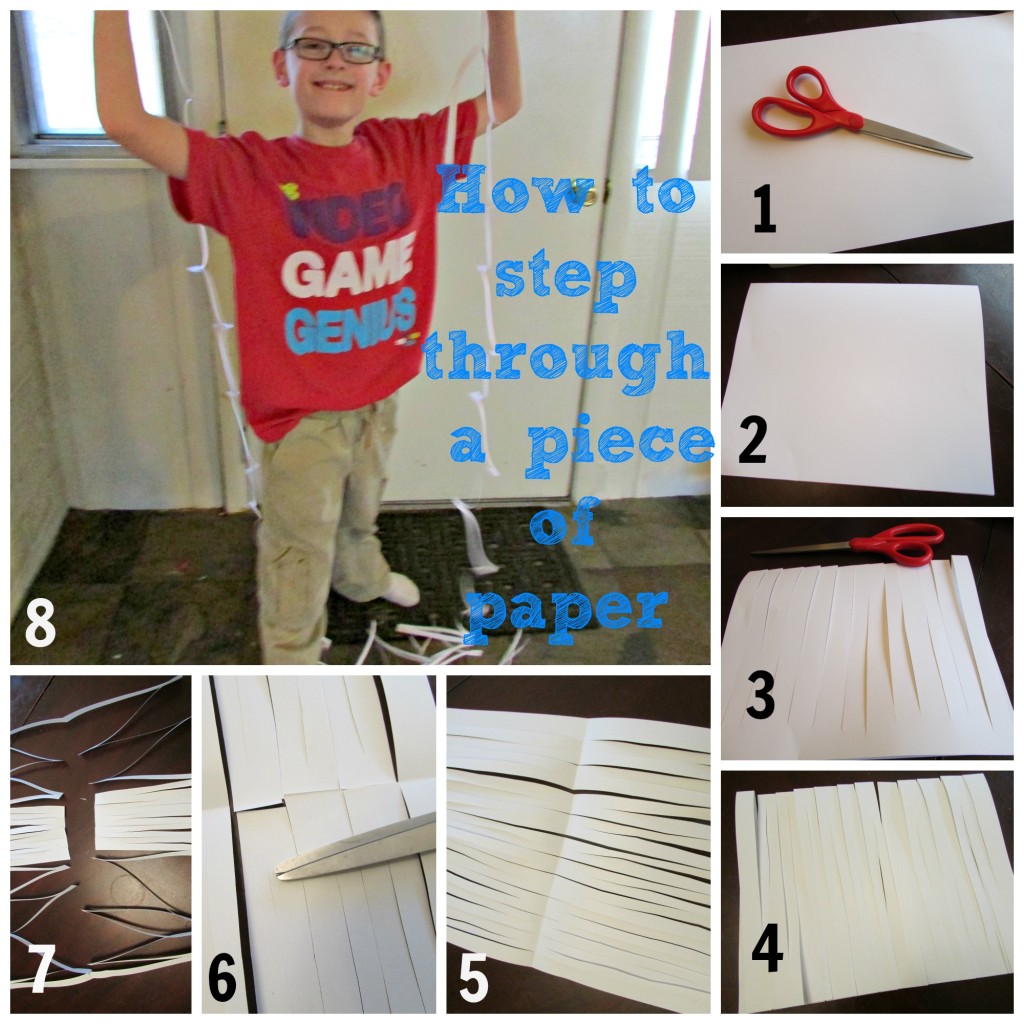 1. Use a rectangle piece of paper
2. Fold it in half
3. Cut slits from the folded side about a half inch apart, not going all the way to the end of the paper
4. Flip the paper around and cut slits in the other direction between the other slits (expect for the first and last ones)
5. Carefully unfold the paper.
6. Skipping the first and last ones sections, cut through the fold.
7. Carefully separate.
8. Amaze your adoring fans and step through the paper!

Want some more ideas for fun and easy magic tricks for kids?

Check your library- ours had a HUGE section of magic trick books.  My kids and I have been tricking each other all day long!

Also, we discovered this fun website: Magic Tricks for Kids. They have tons of fun ones with video instructions. Another cool site with fun magic ideas is Funology.

Your kids will be putting on a show in no time! 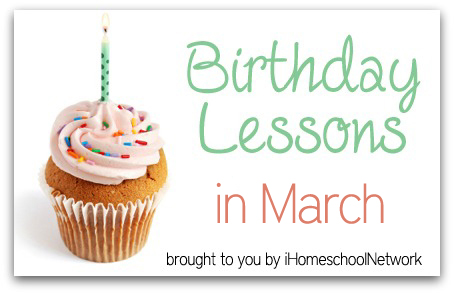 This post is part of the Famous March Birthday’s Series from the iHomeschool Network.
Check out some other amazing posts about other famous people who have birthdays in March.