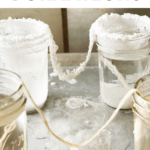 If you want a cool geology experiment for kids, try out this stalactites and stalagmites formation activity. It’s easy and low cost. 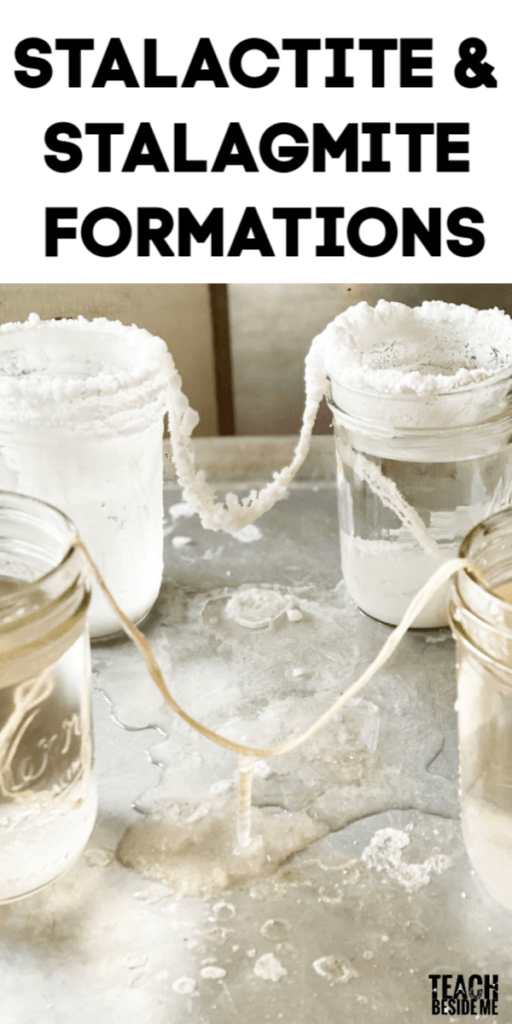 We live right near the mountains and are lucky to live right by these amazing caves, called the Timpanogos Caves (in Utah) with incredible stalactite and stalagmite formations in them.

You can tour them in the Summer time and we have been a few times as a family. I love taking my kids to see natural geological formations. They are impressive and my kids want to learn more!

Seeing them inspired us to do this stalactite and stalagmite experiment.

This is a long-term experiment. We set it up and left it for about 3 weeks.

LOVE Science like me?  Check out my latest Science book: Science Art and Drawing Games for Kids 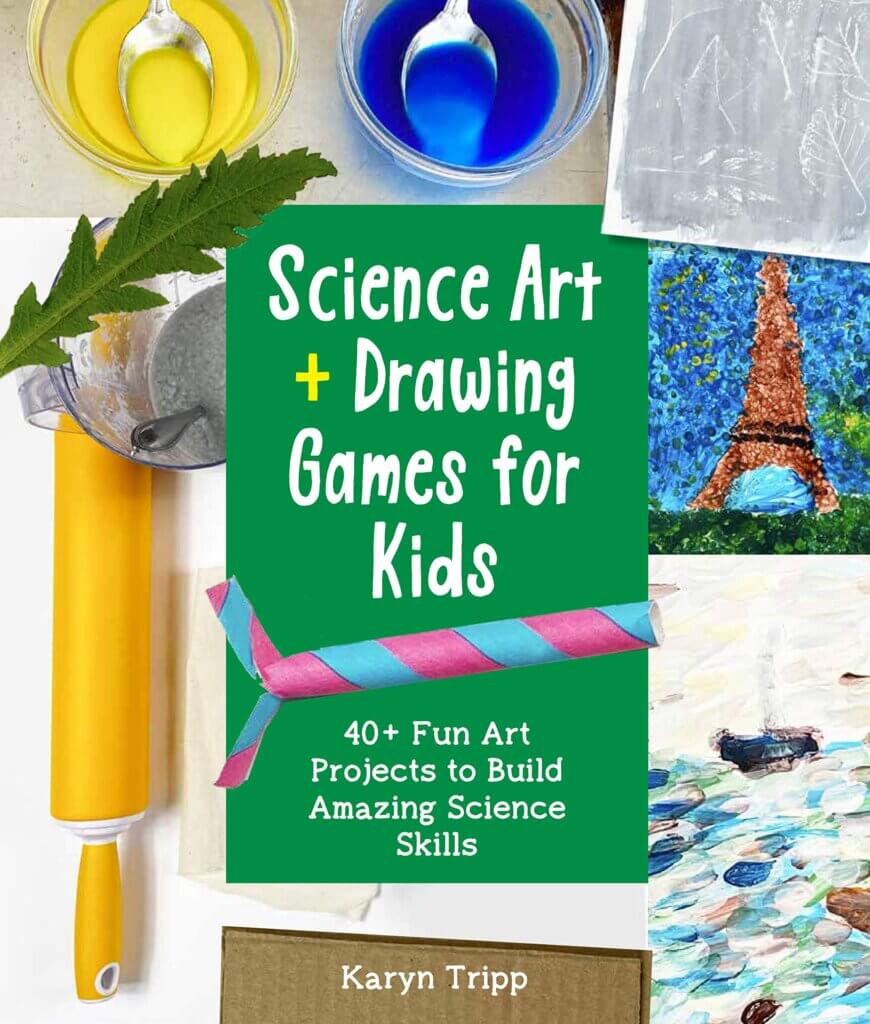 What are Stalactites and Stalagmites? 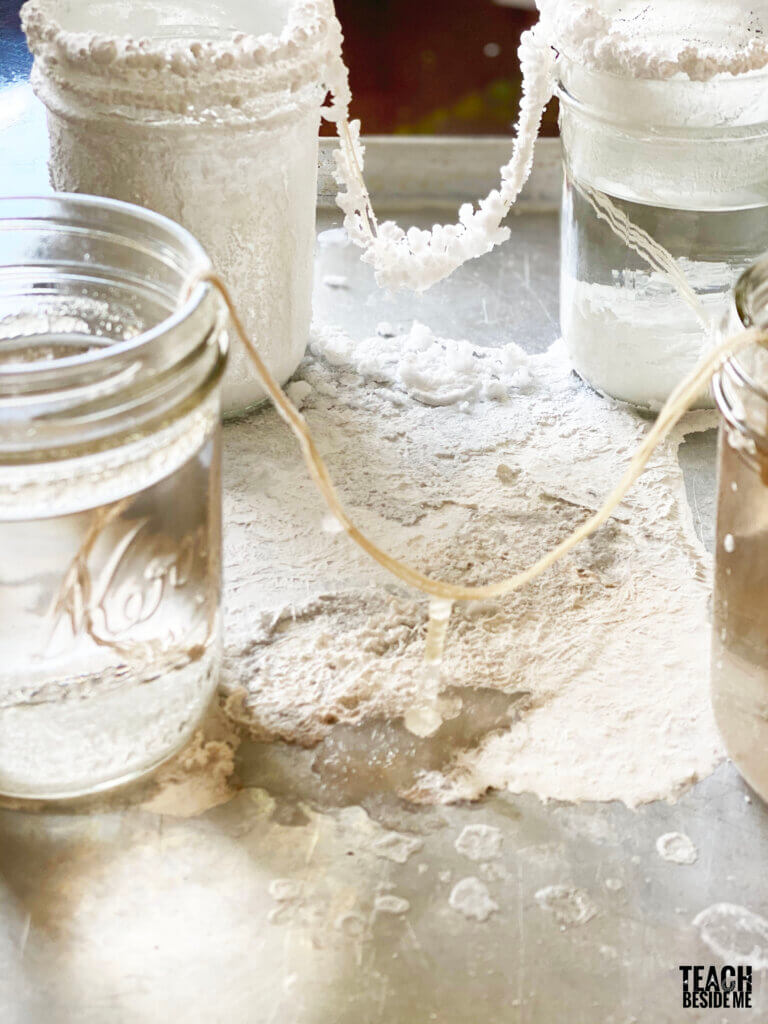 Both stalactites and stalagmites are rock formations that form on the ceilings and floors of caves. They form when water drips from the cave ceiling over thousands of years. Both have a tapering shape that is larger at the base and form a point.

These rock formations typically grow in limestone caves. The minerals that form them are most often calcium carbonate.

Stalactites hang from the ceiling of a cave and are formed from mineral deposits left behind from slowly dripping water.

A stalagmites grow in the same way, but forms from from the cave floor upward. As the water drips from the ceiling above the two are formed simultaneously. A stalagmite is usually larger in diameter

One of the most famous places to see these amazing formations are in Carlsbad Caverns. I remember going there as a kid on a family vacation. They are magnificent! 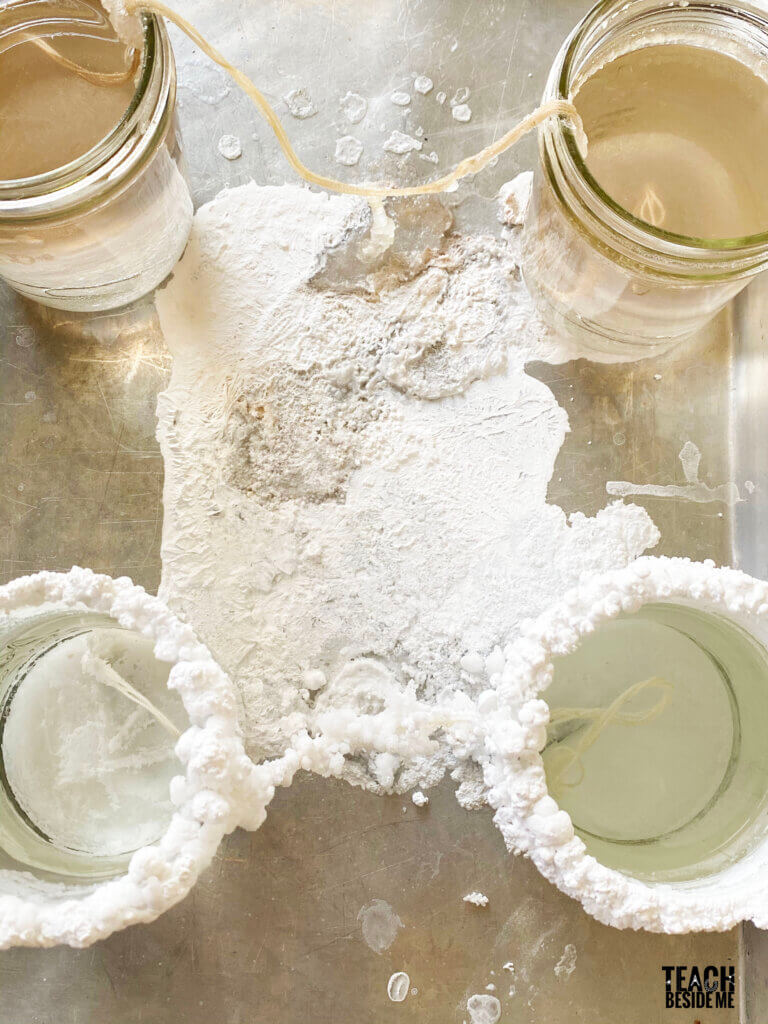 How to Do the Stalactite and Stalagmite Experiment:

For this experiment, we compared the difference between epsom salt and baking soda in this experiment. I have seen instructions for it both ways and wanted to see which way would work better. 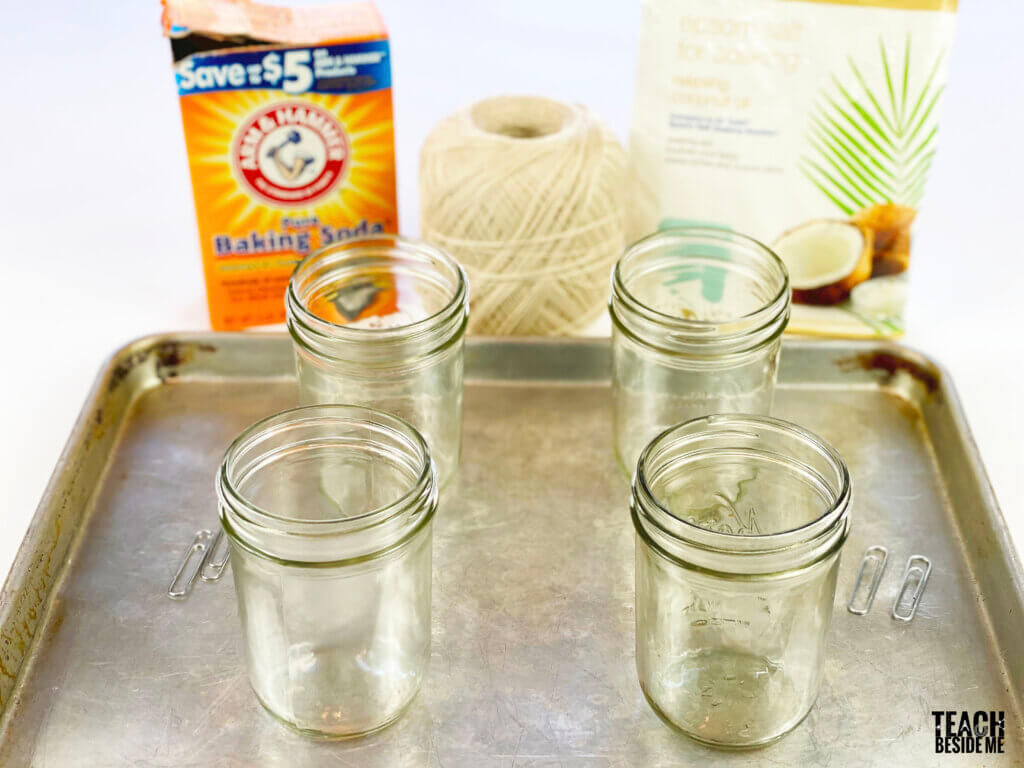 Supplies You Will Need:

Cotton String (or other absorbant string/yarn) 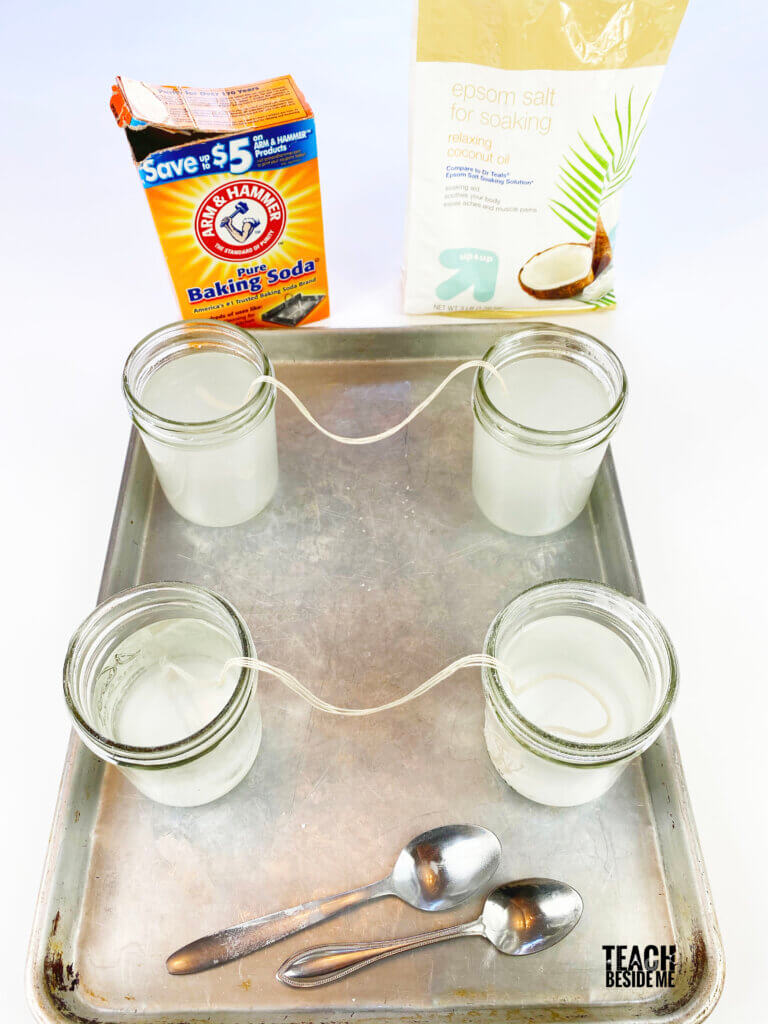 Cut 2 long pieces of string. Ours was thin, so I did it about three strands thick. You want cotton string or yarn as it is more absorbent than synthetic materials.

This string will absorb the water from the jar and allow the water to drip down. It will act like the formations found in caves leaving behind the minerals- either baking soda (sodium bicarbonate) or salt (sodium chloride). 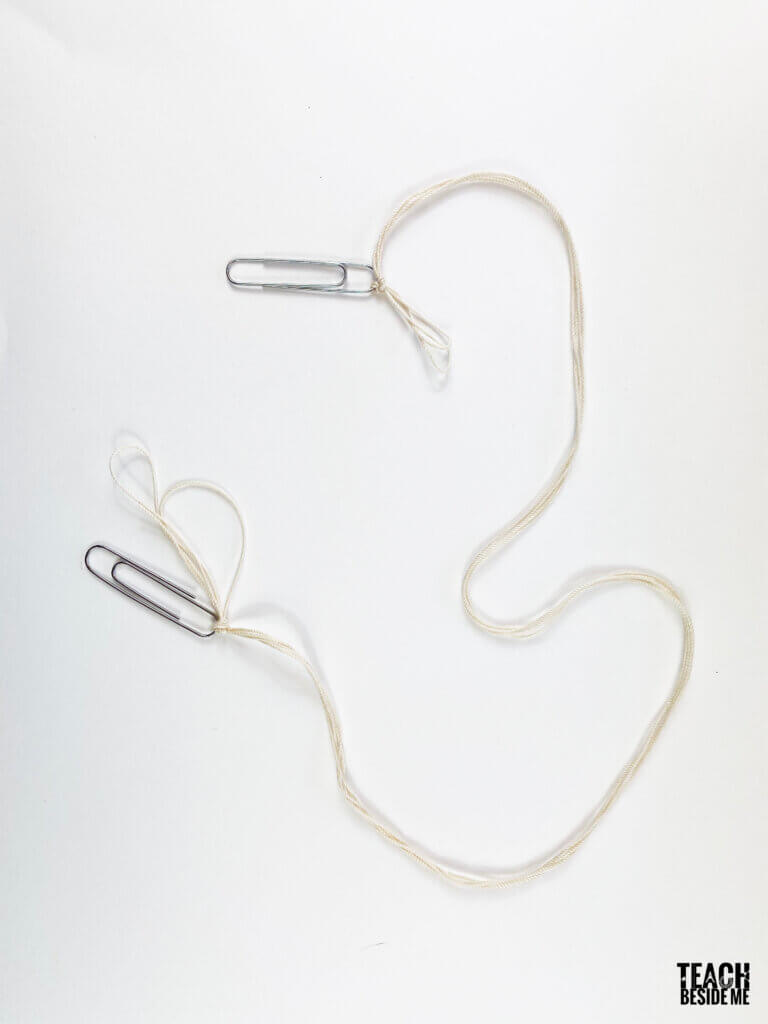 Tie large paperclips, or other objects to the end of the strings to weight them down in the jars. Put the string in each jar. Connect the two jars of baking soda together with the string hanging down in the center. Do the same with the two salt water jars.

Make sure to place a large tray underneath to collect all of the mineral deposits. 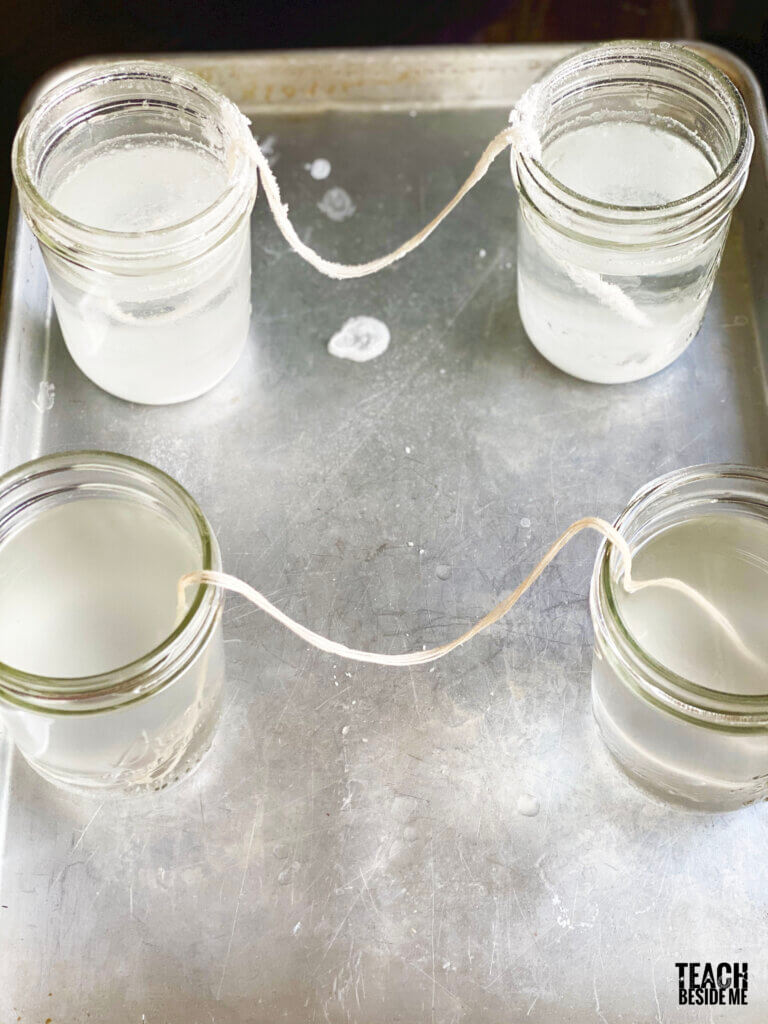 Now you leave it and just observe it each day. We left ours for 3 weeks. There were a few times when the water level got low and I added more of the solution to the jars so it could continue to grow.

Results of the Geology Experiment 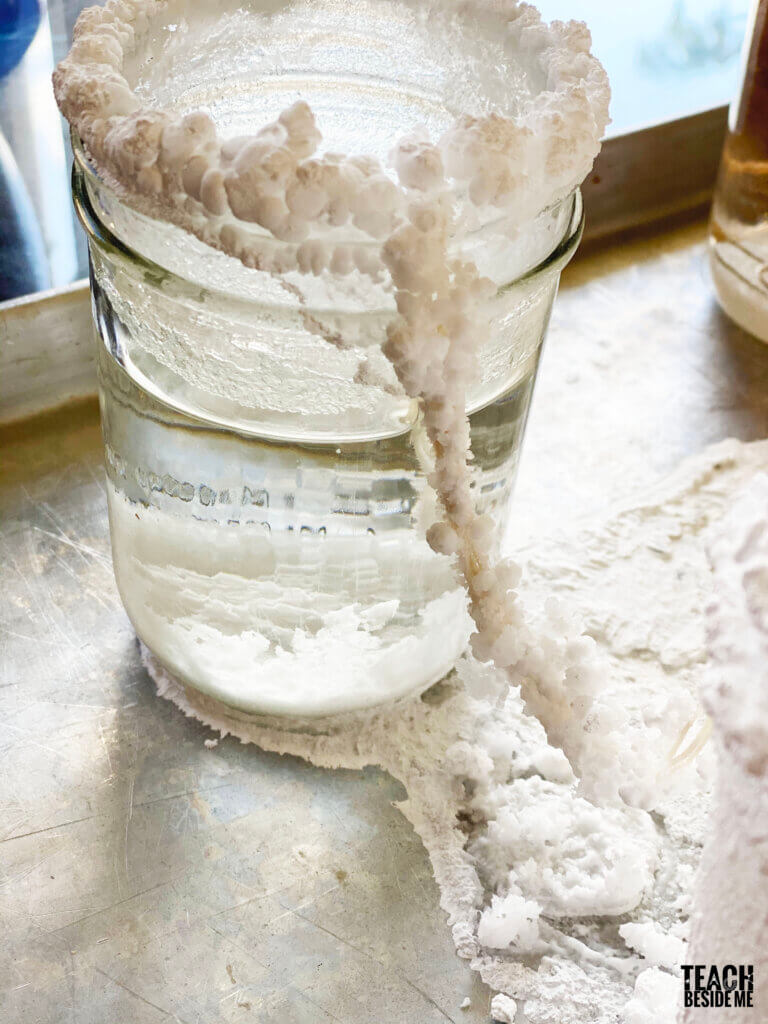 Our baking soda stalactites grew very quickly and spread all over the entire jar. However, the stalagmites did not form as much as we hoped they would. The crystalized formations were so beautiful and we loved seeing how they changed each day. 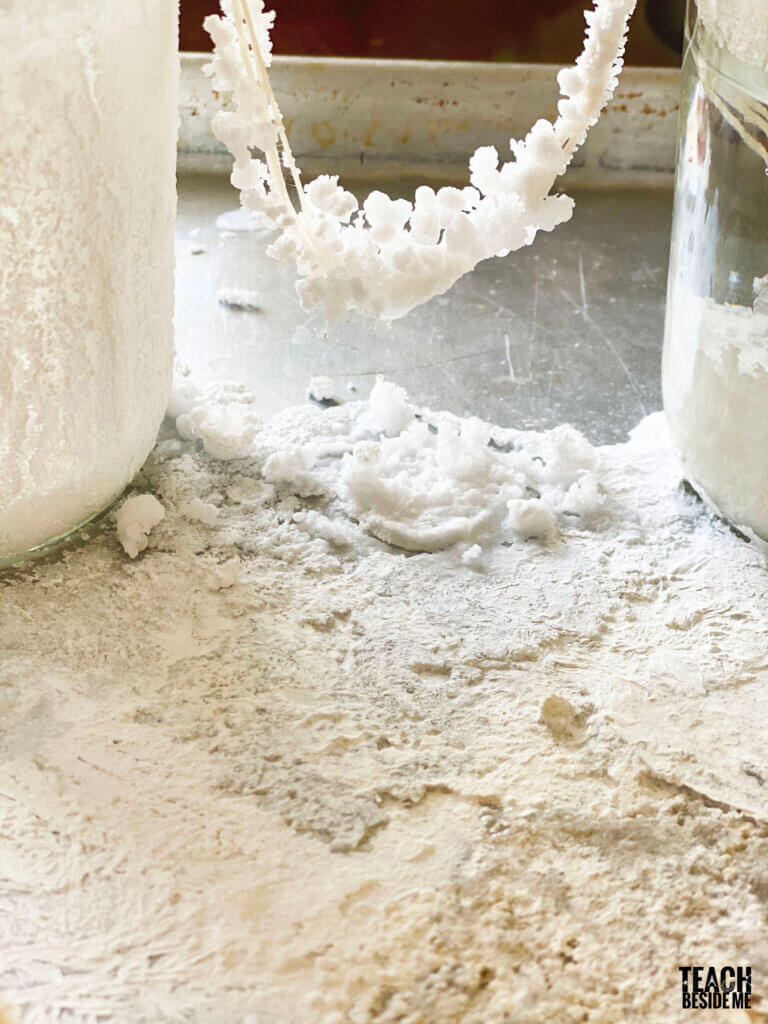 Our salt stalactites formed a little bit slower, but I think we did not add enough salt. Once we added more salt to the jar, it formed a long stalactite that quickly connected to the ground. 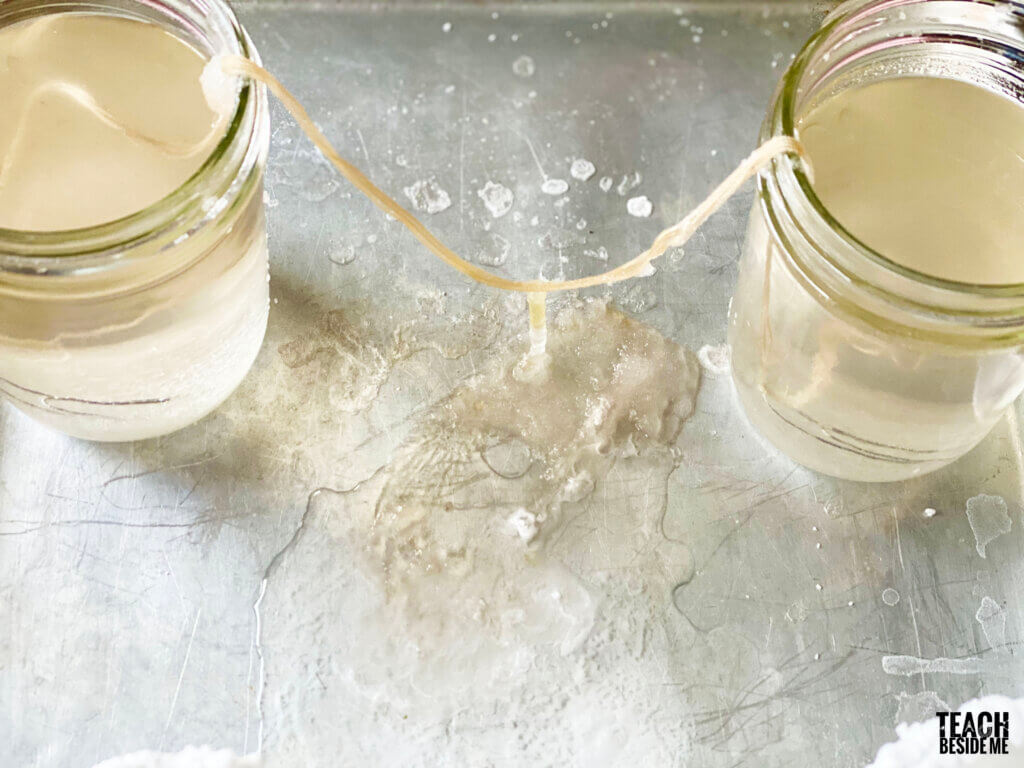 It broke after a few days, then formed a rounded end. The salt one looked a lot more like the traditional formations you would find in a cave. 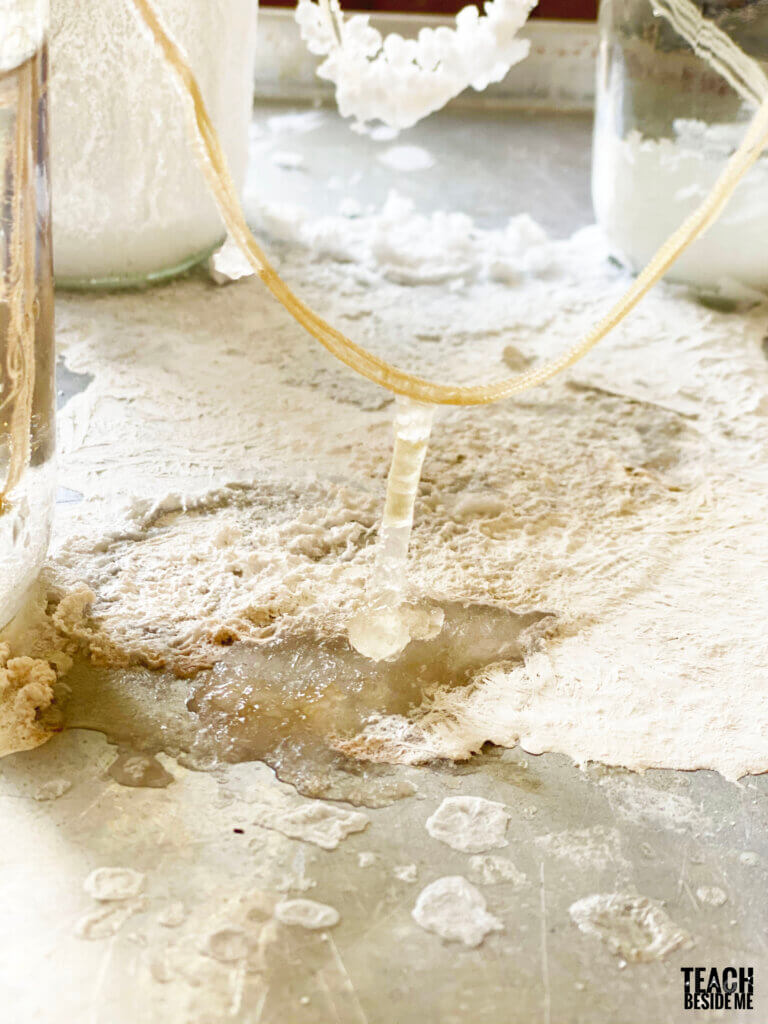 See my privacy policy.
« 80+ At Home and Online Learning Ideas
I’m Bored Bingo- Educational Things to Do When Bored »