I have a little lesson on Isaac Newton’s Laws of Motion today.  Plus a cool experiment to go along with it called Gravity Beads. 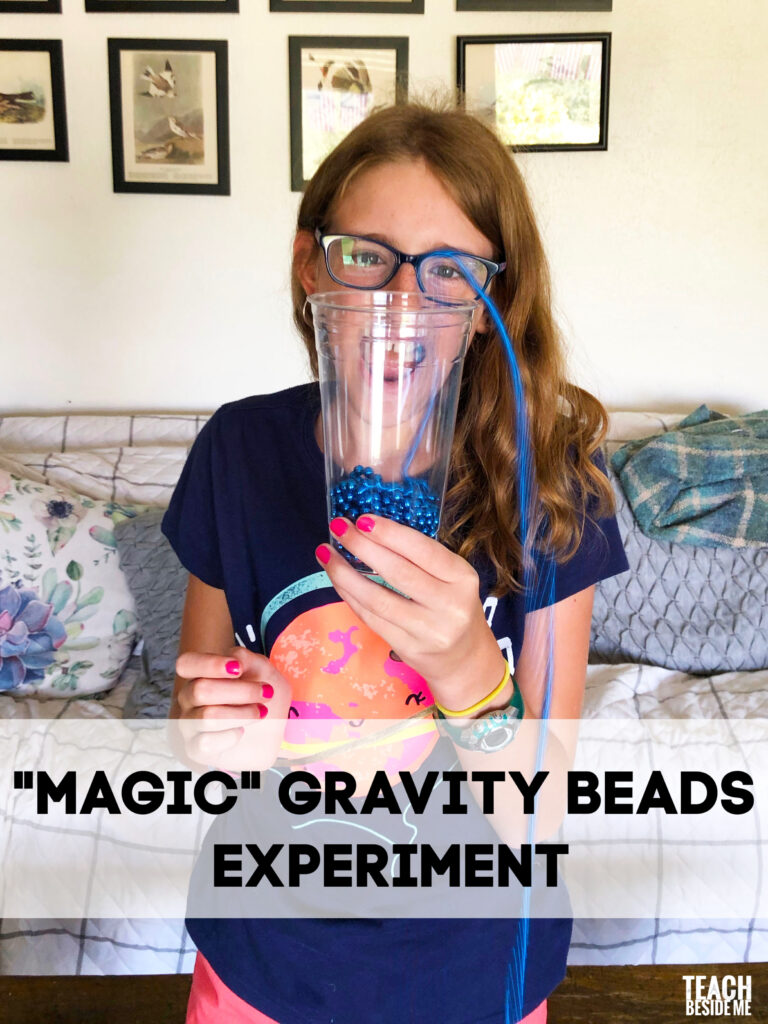 We get the Steve Spangler Science kits in the mail each month. Its a happy mail day when they come. They are a great addition to our science lessons and my kids just have so much fun with them.  (Not a sponsored post, just something we really love.) This month’s box was all about inertia and Newton’s laws of motion. Cool stuff.  The ultimate favorite of this month’s kit were the gravity beads. But first, a little refresher on motion & gravity for you!

What are Newton’s Laws of Motion & Gravity? 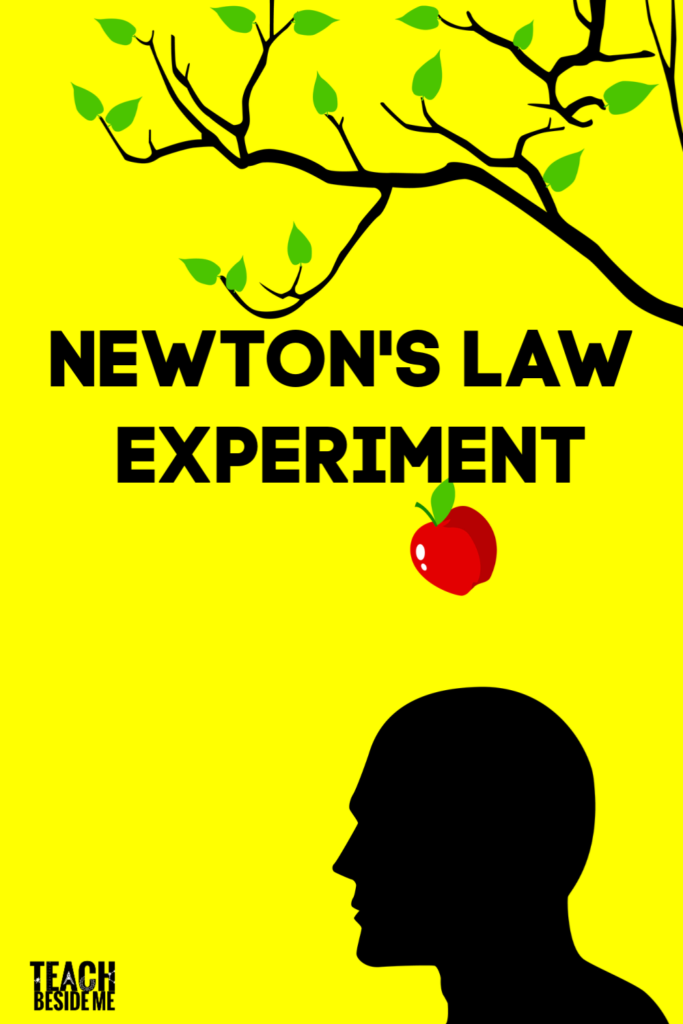 Newton’s First Law states that an object at rest will remain at rest and an object in motion will remain in motion (unless acted upon by force). Another important term is Inertia.  Inertia is the tendency of a body to resist a change in motion or rest.

Newton’s Second Law states that force is equal to the mass of the object times its acceleration or F= MA.  A force is a push or a pull, and mass is a measurement of the amount of matter the object has. Acceleration measures how fast the velocity (speed with direction) changes.  Sobasically it means that you need a force to move an object. The bigger the mass, the greater the force you will need.

Newton’s Third Law says that for every action there is an equal and opposite reaction. Simple? kinda.

How to Do the Gravity Bead Experiment

Watch to see what it is first. 🙂

So, now that you have a basic grasp of Newton’s laws, (you probably already learned all of this in your physics class in high school right?) you will better be bale to understand how this gravity bead experiment works. It’s crazy cool and really just looks like magic, but it’s physics! This is all based on Inertia and the laws of motion!

All you need is a long strand of beads and a large cup. Really, that’s it!  These beads are like the cheap plastic Mardi Gras ones. You can get them anywhere. BUT, the difference here is the length of the strand. This strand is about 50 feet long. If you are going for cost effective, you could try to make our own with the regular beads- just glue many strands together. I am not sure whether it would really be cheaper or not, though.  If you are going for ease, pick up this long strand already done for you.

Since posting this, I have seen a lot of people say they see this happen with their Christmas bead garlands!  So here is a bead garland that is 26 ft. long. Or maybe you have some at home already?!

It’s best to use a large clear cup or glass so you can watch the process. Put the beads into the cup in circular rows so they do not get tangled up while coming back out. This is really important! 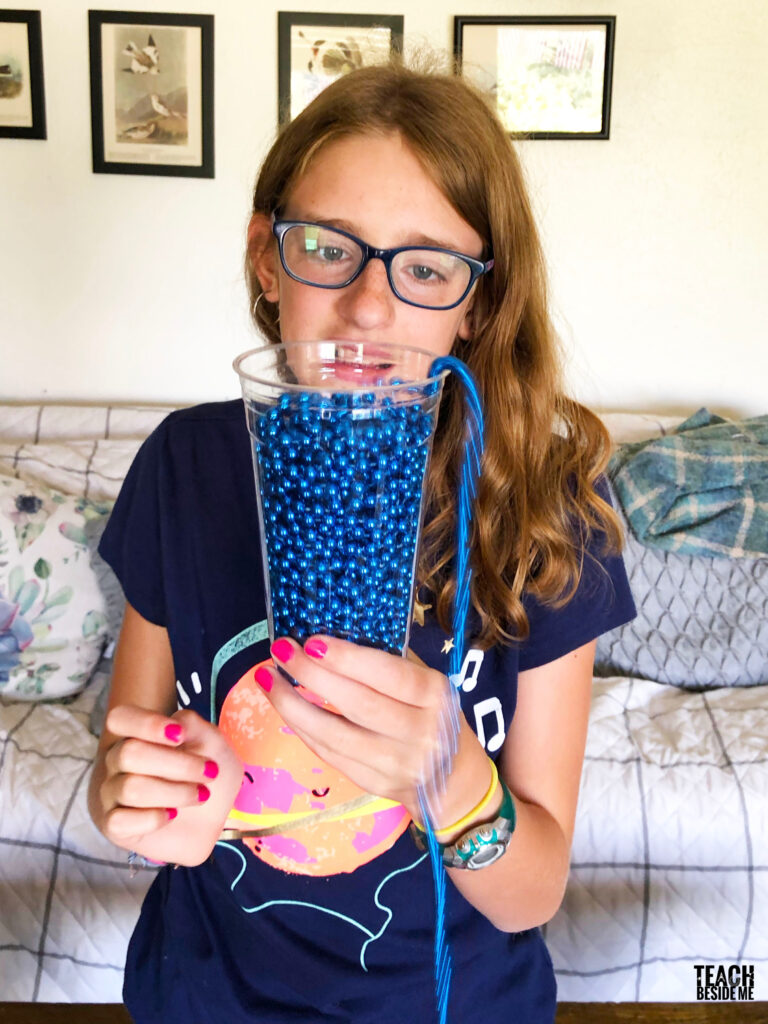 Leave the end of the strand hanging hanging out of the top of the cup.  If you make your own beads you will want to do something to distinguish the ends from the other parts of the strands- add a piece of tape to make it easy to find the ends.

When you are ready, give the strand of beads a little tug. Hold the cup high off the ground, so there is more of a pull downward. They will literally start moving and continue moving until the beads run out.

The coolest thing to do is to take a video of it in slow motion so you can really see what the movements look like.  You’ll see in our video that the beads move upward in an arc before going down. This is because of the initial pull you give it. It continues in that upward motion until the force of gravity brings it downward.  Awesome, right?!

Here’s a tip: Let the beads collect into another cup, then you can keep it going again and again!

Let us know if you try it out!

Or try one of my many other STEM projects for kids!