You guys!!! I am so excited about this post. I made a Solar Powered LEGO Car, and it actually worked!  I got this crazy idea in my head and it was a lot harder to make than I anticipated. It took me a while to get this thing up and running, but somehow I did it! All you need are a few parts and some Krazy Glue and you are on your way.  It’s a great Earth Day STEM project for your kids.

(This is a sponsored post for Elmer’s. All ideas and thoughts are my own, but I was compensated and given free products in exchange for this post.) 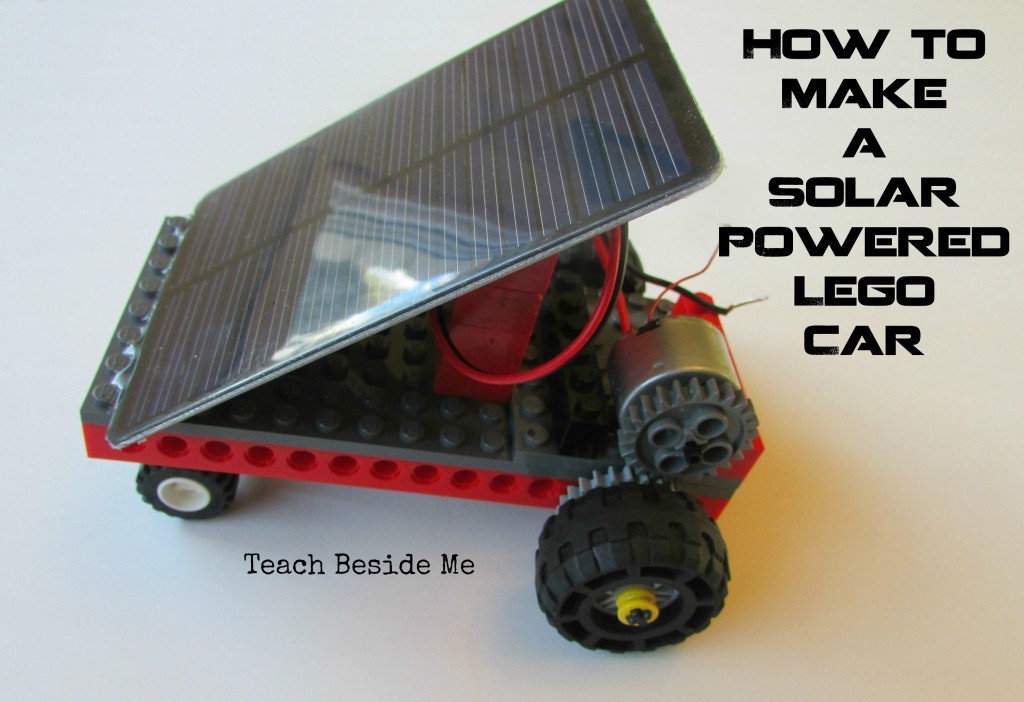 How to Make a Solar Powered LEGO Car?

Yeah, I know you do!  You kids will think you are kinda awesome if you create this project with them.

To make the Solar Powered LEGO Car, you will need a few Lego Parts (including gears & axles) , a small 9v solar panel, a mini 6 v motor (both with wires connected to them), and some extra strong glue (we used Krazy Glue from Elmer’s). 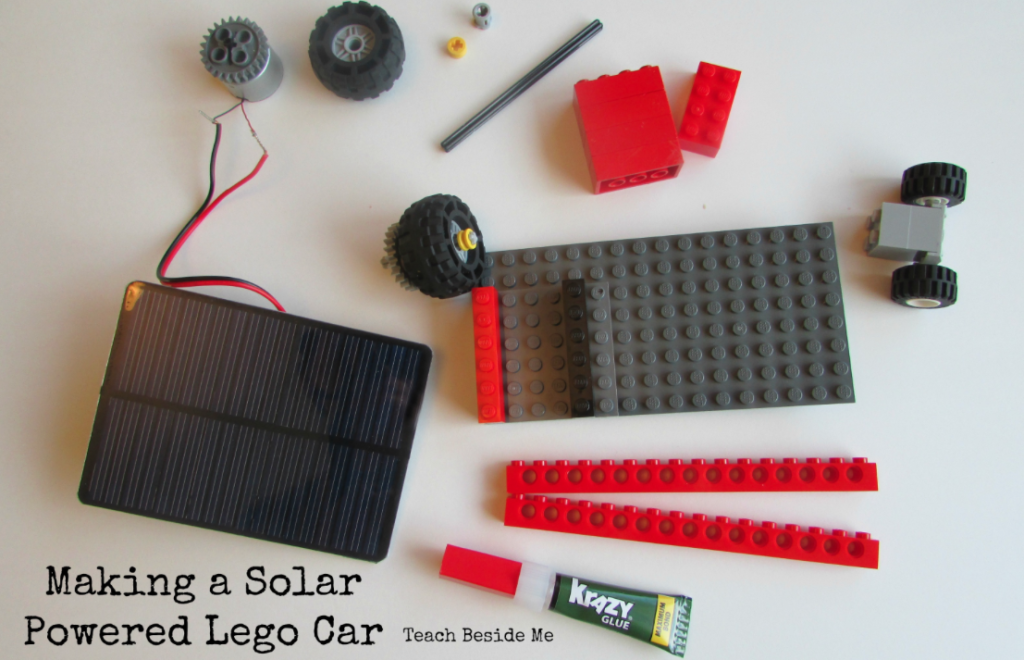 We started by building our car. We used a long baseplate and two sets of wheels- a small set for the front and a large set for the back. To hold up the solar panel on the front of the car, we built up a stack of bricks and used a stripe of glue along the front to keep it in place.  I built a small place to secure the motor on the back of the car by the back wheels. To hold it in place, I glued it in.

The trickiest part of this whole process was figuring out how to get the motor to turn the wheels. 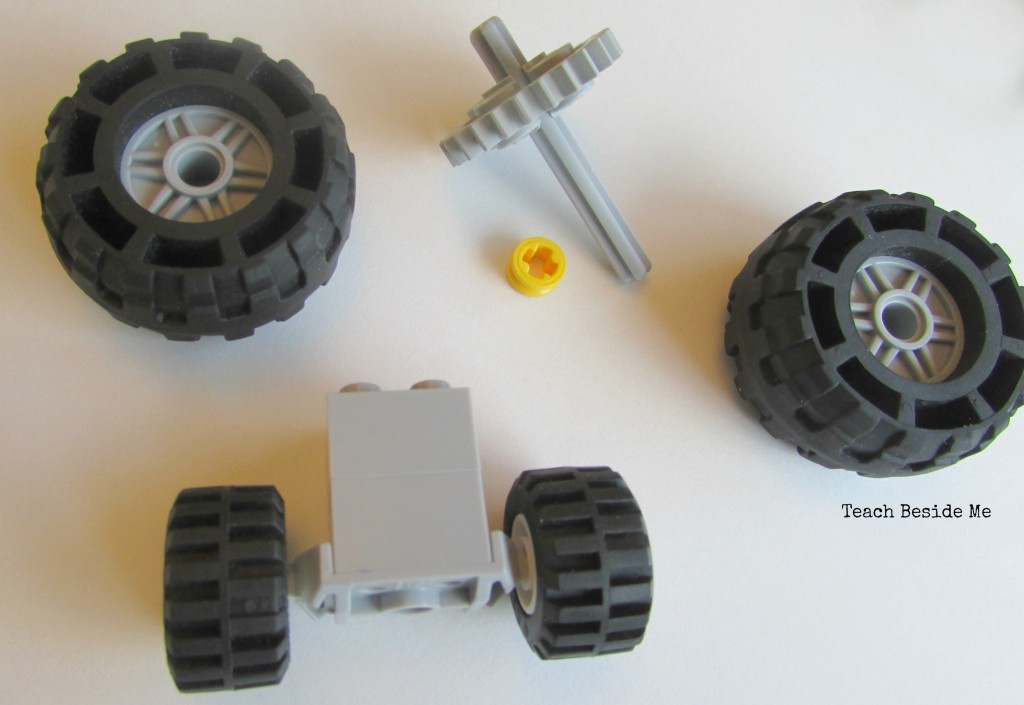 I used the long bricks that have holes along the side and put the axles through those bricks. I used two gears and put one gear on the wheel and one above it connected to the motor. Since the rod on the motor is so tiny, I used a tiny piece of tubing that came from one of my son’s Lego sets and trimmed off a little bit. This secured it into the center of the gear. 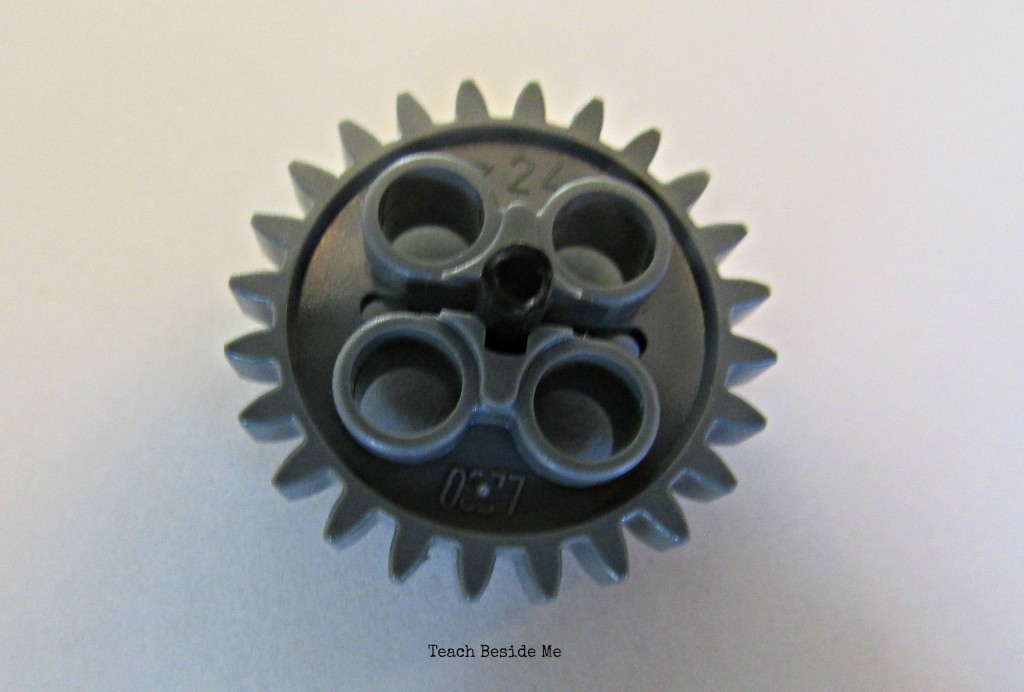 Also, I did not have a long enough axle, so we secured two together underneath with a connector piece and a little glue to secure it! We got creative. 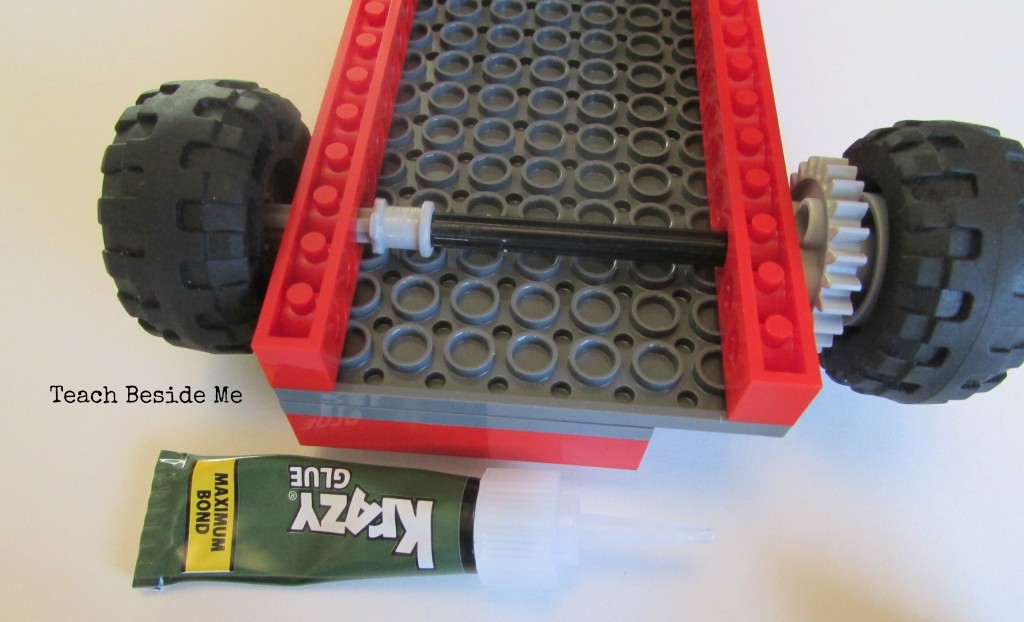 The is the view of the gear connected to the motor. 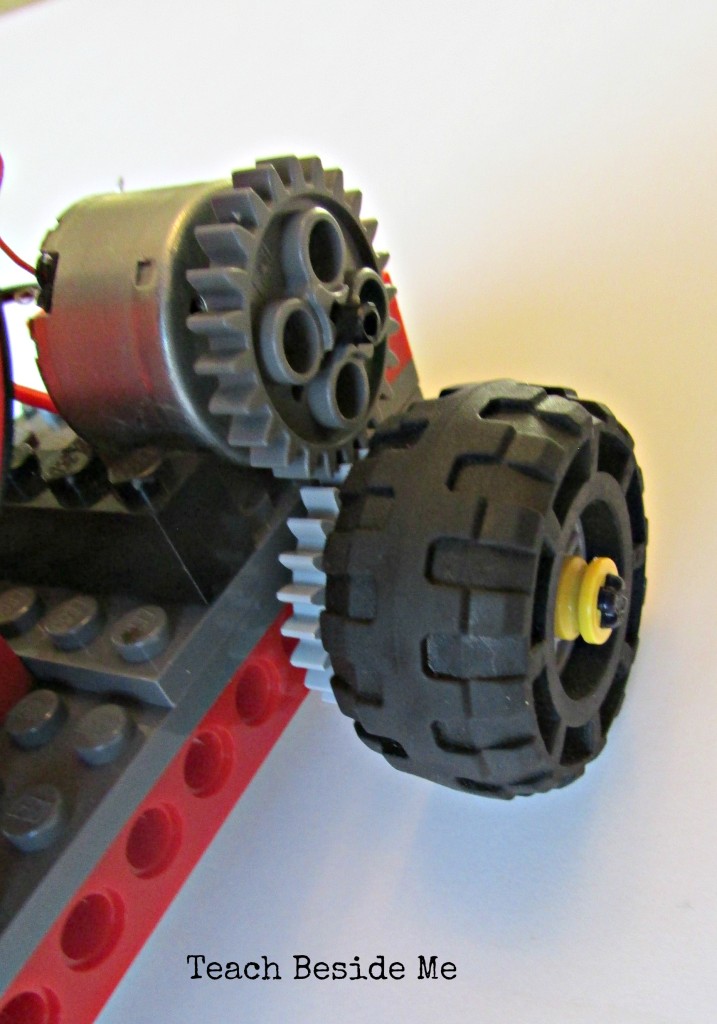 The other challenge came from knowing how many volts I needed for the motor and the solar panels. I bought solar panels that were too small the first time through and it did not create enough power to spin the motor. The second one did, though!  We nearly jumped up and down when the wheels started spinning!! 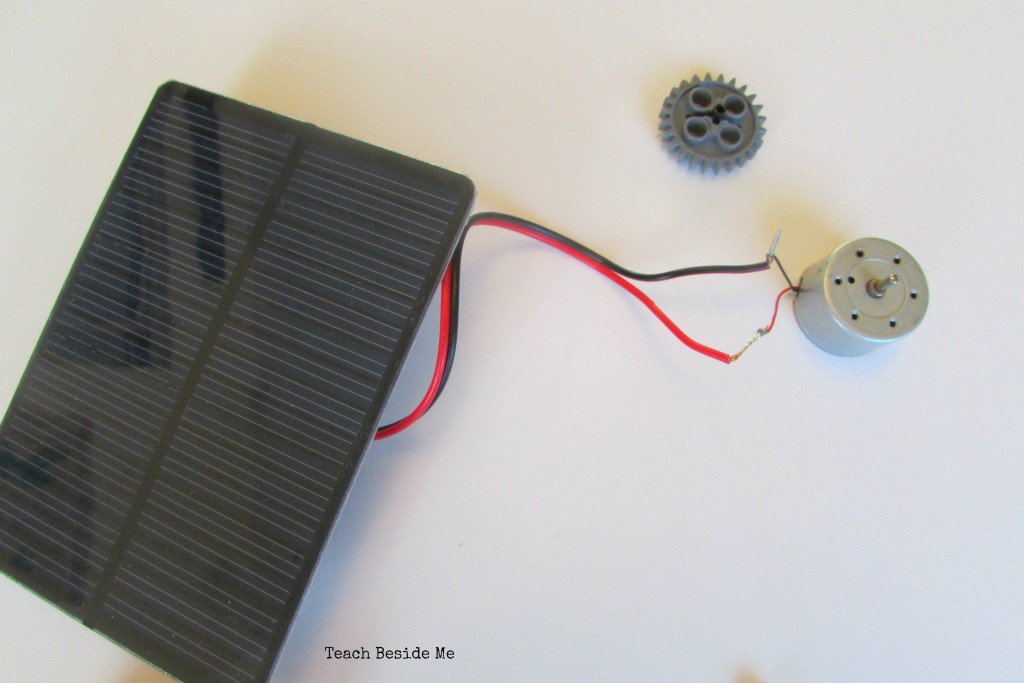 Here is is all put together!  (The wires are not connected in these pictures to keep it from going!)  To start it, connect the wires and set it in direct sunlight for about 10 minutes. Then we plugged in a little portable lamp and followed it around to keep it moving. Every so often it would need a battery jump start. We did this by touching the wires to either side of the battery. 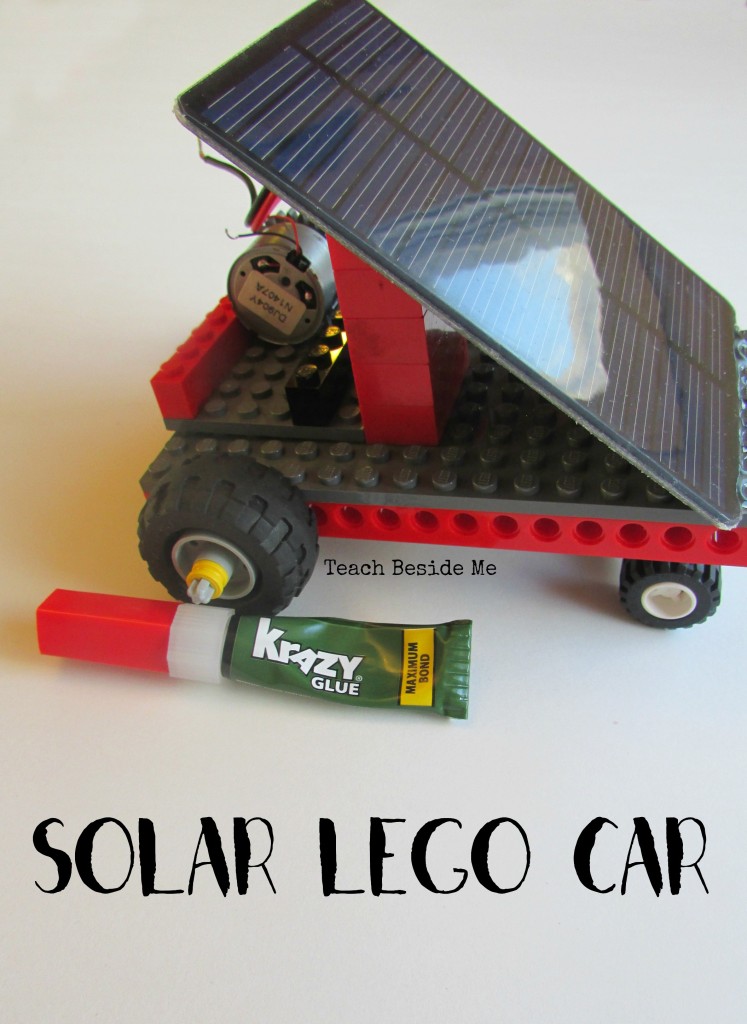 How To Make a Lego Chess Set